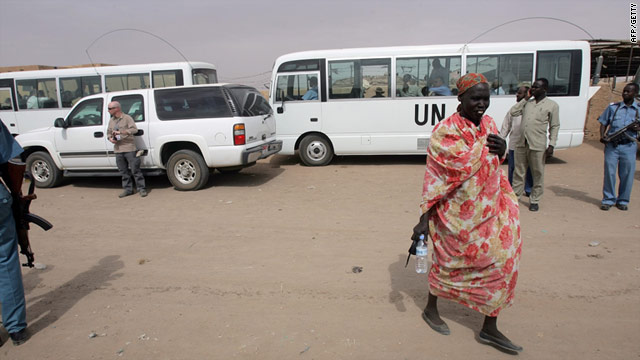 On Wednesday, a team of U.N. officials patrolled the area to assess the extent of the destruction after nearly a week of fighting, pillaging and looting by government-backed militias. Homes and vehicles smoldered, and Abyei was a virtual ghost town except for the armed men walking in the street.

"I am calling upon my president, President Omar al-Bashir, to pull out his force from Abyei," said Salva Kiir, president of Southern Sudan, to allow displaced residents to return home and humanitarian organizations to deliver assistance.

Tens of thousands of people from the population of 110,000 have been forced to flee over the border into Southern Sudan, a U.N. official said on condition of anonymity. "Civilians have deserted Abyei town and surrounding areas."

The latest satellite images released by the Satellite Sentinel Project show purported evidence of Sudanese tanks and amored vehicles in and around Abyei, and a southern-aligned base at Todach is destroyed, allegedly by northern troops.

"We have no casualty numbers, but that doesn't mean no one has died" as a result of the fighting, said Hua Jiang, spokeswoman for the U.N. mission in Sudan.

Fighting began May 19, when the north accused Southern Sudanese forces of ambushing a U.N. convoy carrying northern troops to Goli, killing at least 22 soldiers. Sudanese troops attacked and took control of Abyei in retaliation, a move condemned by the U.N. as a breach of the 2005 Comprehensive Peace Agreement.

Earlier in the week, al-Bashir gave government forces the green light "to respond to any violations by southern forces," according to the official Sudan News Agency. A defiant al-Bashir also denounced the United States' reaction to the recent aggression, saying Sudan "does not fear from its stick."

The U.S. slammed the Sudanese government in a special briefing Monday in Washington. "The attack on the U.N. convoy was deplorable and wrong, but we feel the response of the government was disproportionate and irresponsible," said Princeton Lyman, U.S. special envoy for Sudan.

In a statement at the African Union Summit in Addis Ababa, Ethiopia, on Wednesday, U.N. Secretary-General Ban Ki-Moon expressed concern over the escalation of violence. With less than two months remaining before the south becomes an independent state, the conflict could reignite a bloody civil war that plagued the region before the 2005 peace agreement.

Kiir reiterated that the south will remain focused on its independence and not use the surge of violence as an excuse to be drawn into a new conflict with the north.