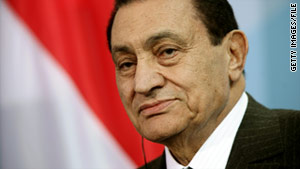 Cairo, Egypt (CNN) -- A Cairo court has ordered the first ruling against Hosni Mubarak since he was ousted on February 11, fining him and his top officials more than $90 million for their role in cutting the mobile phone network and Internet service for five days.

"They were charged with cutting the communication to hinder the efforts of the January 25 revolutionaries," he said. The blocks began January 28 as demonstrations against Mubarak's rule heightened in Cairo's Tahrir Square.

The court order stated that they will have to immediately pay these fines from their personal accounts and that the money will be allocated to the national treasury.

Aly Hassan, a judicial analyst affiliated with the justice ministry, said an appeal filed at the Cairo Administrative Court does not mean that the payment will be delayed or stopped.

"The court ordered an immediate payment and the fine may be increased by the state if the damages increase during the year as compensation for lost revenue." he said, adding that the fines would be deducted from their accounts, which have already been frozen.