From Nicolas Garcia, For CNN 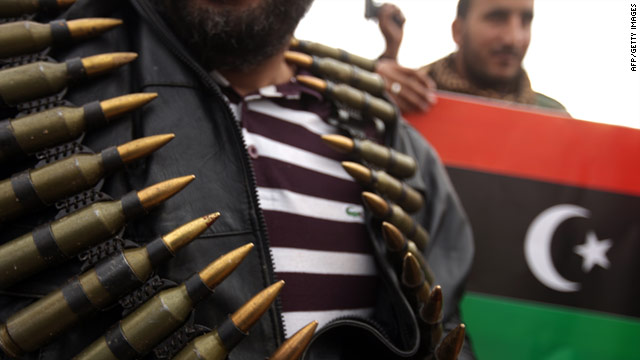 Misrata, Libya (CNN) -- Jose Emmanuel Piaggesi was a teacher in Argentina, but now the piercing staccato of gunfire punctuates his conversations.

The 23-year-old has traded books for bullets, saying Che Guevara inspires him as he fights alongside Libyan rebels in Misrata.

He is ready to give his life in the battle to end Libyan leader Moammar Gadhafi's nearly 42-year rule.

It's an unpopular war with many of the Latin American leftists he typically supports.

"I invite them to look a little more closely at the situation, who is here fighting and why is he fighting," Piaggesi said as he took a break to prepare for the next round of clashes. "He is going to say that it is for liberty -- not for NATO or for anybody, simply for liberty."

On the frontlines in Libya

The unlikely story of an Argentinian fighting with the Libyan opposition has drawn national attention in Piaggesi's home country.

His father, Pablo Piaggesi, told Argentina's Perfil newspaper that he was not surprised his son had chosen to fight for a cause he supports.

"He was always a guy who felt good helping, and was disinterested in money. He is a very special person, very talented. He speaks four languages. He learned to speak Arabic on the Internet in two months," he said.

Pablo Piaggesi told the newspaper that his son was a longtime admirer of Guevara, and had recently visited the museum honoring the Argentinian revolutionary.

Jose Emmanuel Piaggesi said he was proud to be fighting for a new revolution. But he noted that many have already fallen.

But despite the danger, the teacher said he has no plans to head back to the classroom anytime soon.

After speaking to CNN, he returned to his post on the battlefield, where he pledged to stay until Gadhafi is removed from power.