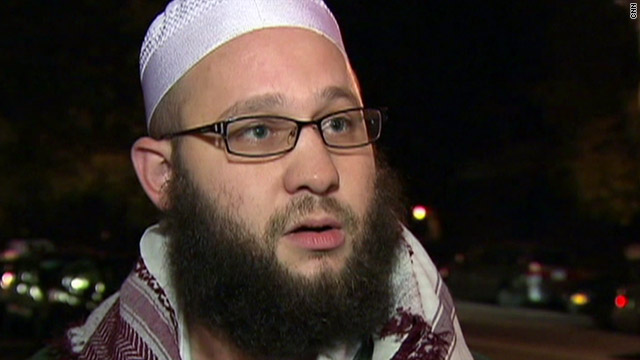 (CNN) -- Younus Mohammad, a New York native and Muslim convert charged with threatening the creators of the TV show "South Park," has been arrested in Morocco, according to the website he co-founded.

"Early on Friday morning brother Younus was arrested by Moroccan authorities," Islampolicy.com said in a posting Sunday. He is being held and awaiting extradition to the United States, the website says.

A criminal complaint against him, alleging the communication of threats, was filed in Virginia earlier this month using his English name, Jesse Curtis Morton.

He once told CNN that Muslims are commanded by Allah to terrorize, though he said he did not read that as a call for killing civilians. He also professed his love for al Qaeda leader Osama bin Laden.

"His arrest comes in the long line of Muslims who have been imprisoned for speaking out against the United States," Islampolicy.com said. "It is part and parcel of the U.S. war on Islam. It is a war, being waged on two interlink (sic) fronts."

A senior law enforcement source had told CNN Morton was believed to be in Morocco.

A former resident of Brooklyn, Morton is the second person charged in the "South Park" case.

In February, Zachary Adam Chesser, 21, who admitted posting online threats, was sentenced to 25 years in prison.

Chesser posted online messages that included the writers' home addresses and urged readers to "pay them a visit," the documents said. Saying it was "not a threat," the website also predicted the men would be killed.

In an affidavit accompanying the recent complaint against Morton, FBI Special Agent Paula R. Menges said Morton, co-founder of a group called Revolution Muslim, worked with Chesser on a "clarification statement" after Chesser's postings. The pair made website postings that were -- despite their claims -- threats, Menges said.

The agent also contends the statement contained pages of justification under Islamic law for the death of those who insult Islam or defame its prophet.

"The case is a perfect example of the reality that touted principles like 'freedom of speech and freedom of expression' do not apply to people that seek to expose the reality of the U.S. Empire," he wrote in an e-mail to CNN. "A simple read of the allegedly threatening document shows repeated emphasis that the document was not meant to incite violence but dialogue. The case is an example of intimidation, forcing silence, while the U.S. goes on killing millions of Muslims and defaming the sacred tenets and people of the true religion."

Morton and Yousef al-Khattab co-founded Revolution Muslim in 2008. In October 2009, they spoke to CNN.

In the interview with CNN's Drew Griffin, Morton, a convert to Islam and one-time follower of the Grateful Dead, defended the September 11, 2001, terrorist attacks and argued that further attacks on Americans were justified.

He also told CNN he did not encourage violence on U.S. soil.

"We're commanded to terrorize the disbelievers," Morton told CNN. "The Quran says very clearly in the Arabic language ... this means 'terrorize them.' It's a command from Allah."

He added, "Americans will always be a target -- and a legitimate target -- until America changes its nature in the international arena."

Of bin Laden, Morton said, "I love him more than I love myself."

Revolutionmuslim.com was the subject of a CNN investigation for its radical rhetoric supporting "jihad" against the West and praising bin Laden. Its organizers insisted they acted within the law and seek to protect Islam.

In April 2010, Revolutionmuslim.com posted an entry that included a warning to "South Park" creators Trey Parker and Matt Stone that they risked violent retribution after the 200th episode of the cartoon series included a satirical discussion about whether an image of the prophet could be shown. In the end, he was portrayed disguised in a bear suit.

"We have to warn Matt and Trey that what they are doing is stupid," the posting on Revolutionmuslim.com said, "and they will probably wind up like Theo Van Gogh for airing this show. This is not a threat, but a warning of the reality of what will likely happen to them."

Revolutionmuslim.com last spring said despite the provocative post, the site was calling simply for protest, not violence.

He said he regretted that his message was taken by some as a justification to attack civilians.

"It was an idiotic thing, looking back on things now," al-Khattab said.