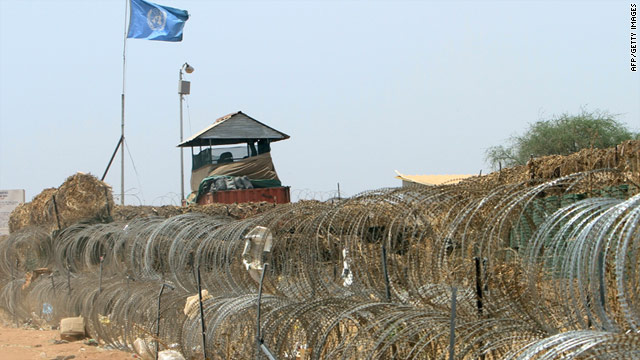 The deal, negotiated Monday in Addis Ababa, Ethiopia, is designed to "ensure that the two parties can maintain stable and secure relations," the African Union said in a statement. "The agreement also establishes a Common Border Zone between North and South Sudan, which is to be demilitarized and jointly monitored and patrolled."

The deal was brokered by the African Union and signed by top military and political officials.

Additional negotiations will be held within a week, the statement said.

In the wake of January's lopsided vote for independence by residents of Southern Sudan, the autonomous region has been scheduled to become an independent state in early July.

But Ezekiel Gatkuoth, the representative of Southern Sudan to the United States, said war could break out between the two sides if the international community does not demand that Sudan withdraw its forces from Abyei so residents who have fled can return.

"People are dying daily. They have no food. They have no shelter," he said. "We are asking the world to respond to this catastrophe."

Rain and impassable roads were also making it harder to find people as they fled into the bush, which has made it tough to get a reliable estimate of the number of the displaced. The Sudan People's Liberation Army has cited 150,000; the United Nations has cited 30,000 to 40,000.

Last week, the president of the Southern Sudanese government demanded an immediate withdrawal of the Sudanese armed forces that occupy Abyei.

And on Monday, the government of Sudan requested that the United Nations Mission in Sudan (UNMIS) leave the country by July 9, the date set for South Sudan's independence.

"The Sudanese foreign minister has sent a letter to Ban Ki-moon that UNMIS' mandate in Sudan comes to an end at the end of the transitional period, on July 9," said Khalid Musa, spokesman for the Sudanese Ministry of Foreign Affairs, referring to the U.N. secretary-general.

Asked whether tensions in Abyei could lead to an extension of UNMIS' mandate in Sudan, Musa said: "The government is open to dialogue as realities unfold on the ground, but UNMIS' mandate ends on July 9."

"The government has informed us of its request and a letter was sent to the U.N. secretary-general," he told CNN.

UNMIS was established following passage of U.N. Security Council Resolution 1590 to help facilitate peace-building and humanitarian efforts in Sudan shortly after the signing of the Comprehensive Peace Agreement.

In retaliation, Sudanese troops attacked and took control of Abyei, a move condemned by the United States as a breach of the 2005 Comprehensive Peace Agreement, which ended the county's decadeslong civil war between the predominantly Arab and Muslim north and predominantly black animist and Christian south. The conflict led to the deaths of two million people, many from starvation.

The U.N. compound in Abyei was shelled by mortar rounds and two peacekeepers were wounded, according to a statement from U.N. Secretary-General Ban Ki-moon's press office.

The government challenged Clooney to prove his allegations.

"I do not think that he has any evidence for ethnic cleansing," said Ibrahim Ghandour, minister of information for the ruling National Congress Party.

The Satellite Sentinel Project and the Enough Project accuse the government of having greater ambitions.

"Along with the military occupation of Abyei, the Khartoum regime is laying the groundwork for a takeover of oil fields near Sudan's north-south border, its ultimate objective," said Enough Project co-founder John Prendergast.

"If there are no consequences for these violations of the north-south peace deal and for the war crimes being committed in Abyei, the likelihood of full-scale war increases daily."