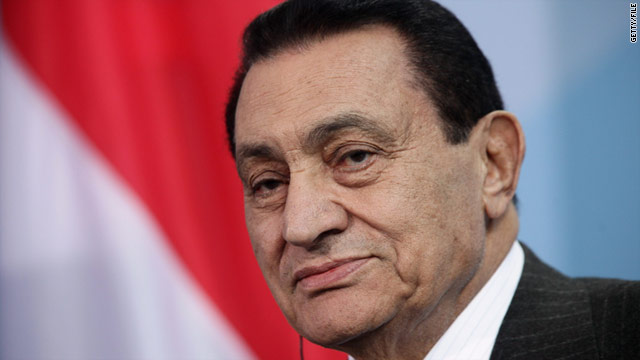 Hosni Mubarak is accused of consenting to a plan to kill protesters in Cairo's Tahrir Square on January 25.
STORY HIGHLIGHTS
RELATED TOPICS

Cairo (CNN) -- The criminal trial for Hosni Mubarak and his two sons has been scheduled for August 3, the attorney for the former Egyptian president said Wednesday.

Mubarak, who was forced from office in February, is accused of consenting to a plan to kill protesters in Cairo's Tahrir Square on January 25. He allegedly ordered police officers to use live ammunition while they fired into a crowd.

The former president, who denies the charges, could be executed if he is convicted of ordering any killings, Egyptian Justice Minister Mohamed Abdelaziz al-Juindy said earlier this month.

All three are scheduled to be tried at Cairo Criminal Court on August 3, Saeed said.

Egyptian prosecutors on Tuesday said Mubarak is too ill to be transferred to the prison hospital in Tora. The prosecutors concluded that the hospital couldn't accommodate Mubarak's needs after the former president was examined by a medical team.

It was not immediately clear if another prison facility in the country will be able to house the deposed leader.

Mubarak has been held in a hospital in Sharm el-Sheikh since mid-April, after complaining of heart palpitations and blood pressure problems. But Aly Hassan, a judicial analyst affiliated with the justice ministry, recently said Egyptian courts can proceed with a case if a defendant is in poor health.

This week, El Deeb said that the former president is "very sad and sorry" about the allegations made against him, but has no regrets.

El Deeb denied that Mubarak gave any kind of authorization to use force or live ammunition against demonstrators calling for his removal.