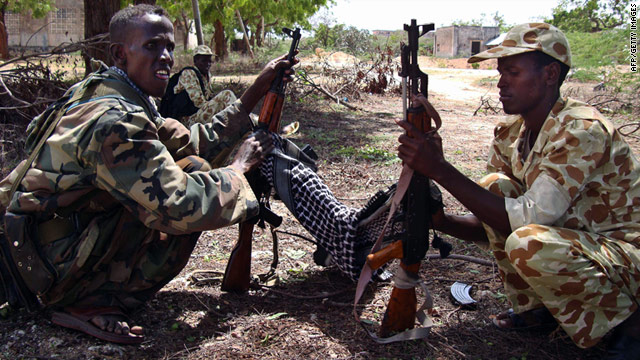 Minneapolis (CNN) -- The FBI is investigating reports that a suicide bomber who killed two African Union soldiers in Mogadishu, Somalia, this week was an American citizen, an FBI spokesman said Thursday.

"We're aware of the bomb that went off in Somalia and we have folks over there and are working with people over there to try to identify the bomber or bombers," said Steve Warfield, a spokesman for the FBI regional office in Minneapolis. "We don't know if there's any (tie) to Minnesota, and we won't know the answer to that until we have official confirmation of who that bomber is."

According to the African Union, several "extremist insurgents" had disguised themselves as Somali government forces in order to attack an African Union post.

Two AU soldiers were killed when one of the suicide attackers detonated his explosives, the African Union Mission in Somalia said in a written statement.

Days after Monday's suicide bombing, al-Shabaab, a Somali militant group allied with al Qaeda, posted a statement on its website identifying the suicide bomber responsible for Monday's bombing as Abdullahi Ahmed, a Somali-American from Minneapolis.

Al-Shabaab also posted a statement and a 20-minute audio clip from the man it identified as the suicide bomber, who spoke in English during part of the recording.

"I have been a member of al-Shabaab for two years. I am from Minnesota, USA," Abdullahi Ahmed is quoted as saying in the statement. "I am so happy to turn my body into shrapnel for the infidels."

Omar Jamal, the first secretary to the Somali Mission to the United Nations, said the man speaking on the audio recording brought back a "vivid memory" of his former acquaintance, Abdullahi Ahmed.

"This guy was a young guy, he was a taxi driver in Minneapolis ... I met him a couple of times, and we debated about the current Somali situation and Jihadist philosophy," said Jamal, a Minneapolis resident and advocate for the city's Somali community.

"He was really very fundamental, to the point where he believed I was brainwashed by the U.S. government. So he was very clear in what he believed," he said.

In 2008, a sizable group of young Somali-American men left Minneapolis -- home to the nation's largest Somali population -- and were feared recruited by al-Shabaab. Several were reported killed, according to Minneapolis community leaders.

The family of one, Jamal Bana, 20, told CNN in 2009 that they learned of his death via the Internet. Another one, Shirwa Ahmed, 27, blew himself up and killed 29 others in the fall of 2008 in what was believed to be the first suicide bombing carried out by a naturalized U.S. citizen. The incident raised red flags throughout the U.S. intelligence community.

Several of the young men are now facing federal terrorism charges because of their alleged involvement with al-Shabaab. The alleged offenses include providing financial support to those who traveled to Somalia to fight for al-Shabaab, attending terrorist training camps operated by the group and fighting on behalf of it, federal prosecutors said in a release.

The U.S. State Department has said al-Shabaab is believed to have ties to al Qaeda.

Al-Shabaab has been waging a war against Somalia's government in an effort to implement a stricter form of Islamic law, or sharia law. Somalia has not had a stable government since 1991, and fighting between the rebels and government troops has added to the impoverished East African nation's humanitarian crisis.

Al-Shabaab is one of almost 50 groups that have been designated by the State Department as foreign terrorist organizations.