By Emily Wither for CNN 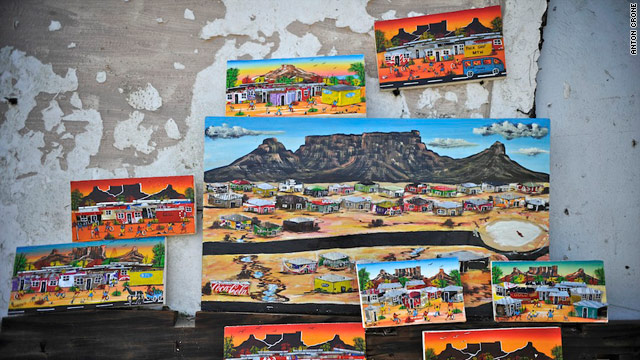 (CNN) -- On the busy streets of Cape Town a group of artists dodge traffic and evade the police as they try to sell their work.

For these Zimbabwean immigrants the "robots," South African slang for traffic lights, are the marketplace where they try and eke out a living.

"Robots" in South Africa are a common place for township entrepreneurs to hawk their wares to passing motorists. But drivers are more used to being offered sunglasses or earmuffs than works of art.

The artists who sell at the traffic lights each have their own story of hope and survival, many choosing to come to Cape Town for better work opportunities and living conditions.

"I came from Zimbabwe in 2007 to get away from the political and economical problems that make life hard there," explained 24-year-old artist Alex Makumbe.

"In Zimbabwe it's tough to earn a living. There were no jobs," said Lawson Matthew, another young artist living in Cape Town.

The artists say they have to trade at traffic lights because they can't find anywhere else in the city to sell their work. They explain that setting up a market stall is difficult for them and competition for spots is tight.

But despite their daily struggle each artist carries on to support their family and send money back home.

Many of the artists taught themselves how to paint when they saw it was a way they could make money. Matthew says he learnt how to create the township art from his brother.

"I use soft drink tins, small nails, enamel gloss paint for the background and activities painted in the front," he said.

"Sometimes I use sand to create textures for the roads and I really like my backgrounds -- mountains, trees and sky," he continued.

The township paintings depict typical scenes in Cape Town, often featuring the city's prominent Table Mountain landmark in the background. The pictures sell by size, ranging from $25 to $90.

These unique and colorful paintings caught the eye of one passerby who stopped to chat to the artists at an intersection.

Xenia Forrester and her husband Mark decided to extend a helping a hand to the street artists after hearing about the difficulties they faced while trying to sell their work.

"The artists work hard, struggle a lot and really want to make a better life for themselves and their families," said Forrester.

It is difficult to sell, especially when people are not in a good mood.
--Lawson Matthew, 'Robot Artist'
RELATED TOPICS

"We wanted to be part of something here at a grassroots level and felt like this would be a good start as they had the ambition, hard work and talent," she continued.

The pair have set up a website called African Cartel to give a platform for the artists -- collectively called the "Robot Artists" -- to sell their artwork. The hope is that online they'll encounter a far more receptive audience than the often-hostile drivers they face at busy intersections.

"It is difficult to sell, especially when people are not in a good mood," Matthew said. "We face constant rejection and even people being rude."

"It's also dangerous running in and out of traffic," he continued.

It's not just cars that the artists need to watch out for -- they are also at risk of being arrested by the police and having their work confiscated.

"Some people shout at us, rainy conditions make it hard to sell and can damage the paintings and police chase us for selling at the robots," explained Makumbe.

Forrester says it is hard not to be drawn in by the bright and colorful paintings and hopes the website will generate more business for the group.

But creating the art in their homes can be a challenge. Conditions are often cramped and power cuts force the artists to work by candlelight. African Cartel has plans to eventually set up a creative workshop space where the artists can work from, share ideas and gain inspiration.

And the artists too have big plans. Matthew says he wants to be just like Picasso and Makumbe hopes to take his creative abilities online and do a web graphics and design course. For now at least, it's green lights ahead for the Robot Artists.