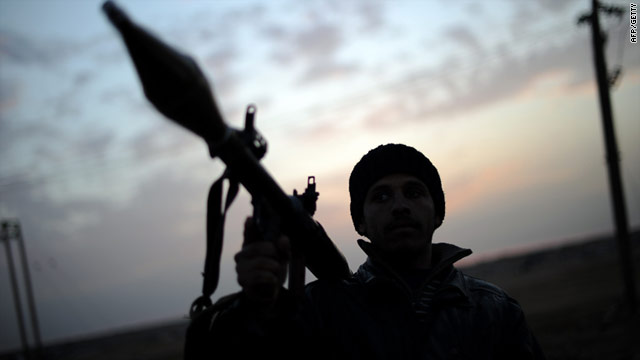 At least one person is thought to have died while in the custody of Libyan rebels, Human Rights Watch said in its report.
STORY HIGHLIGHTS
RELATED TOPICS

(CNN) -- As NATO airstrikes continue to pound pro-government facilities in Libya, Human Rights Watch charged Sunday that Libyan rebels are arbitrarily detaining dozens of civilians suspected of loyalty to ruler Moammar Gadhafim, holding them without trial or due process.

At least one person is thought to have died in custody, with his body showing signs of torture, the group said in a report based on visits to rebel-held parts of Libya.

It is difficult to tell exactly how many civilians are being held without charge because some are held by militias and because the rebels do not clearly distinguish between civilian detainees and captured pro-Gadhafi fighters, Human Rights Watch said.

The rebel Transitional National Council, based in Benghazi in eastern Libya, is seeking international support including money in its battle to oust Gadhafi. A NATO-led mission that has focused airstrikes on Gadhafi's military capability bolsters the rebel efforts.

However, the Human Rights Watch report raised questions about the rebel leadership's overall control of its forces and observation of human rights. In addition to the report, the United States expressed disappointment last week over the expulsion by Qatar of Eman al-Obeidy to Libya, a decision that it called a "breach of humanitarian norms."

Al-Obeidy grabbed the world's attention earlier this year when she accused Gadhafi's security forces of gang-raping her. She then fled Libya and was in Qatar awaiting resettlement as a refugee when she was deported Thursday to Benghazi.

A high-level U.S. State Department source said Sunday al-Obeidy had left Libya and was on the way to Malta with her father. Al-Obeidy, who is being accompanied by a U.N. Human Rights Commission representative, will eventually head to a processing center in Europe before leaving for a final destination, the source said.

"These people at the top of this organization are genuine believers in democracy in the rule of law," Hague told the BBC Sunday. "It is quite inspiring ... to see their real hope for the future of their country."

"Certainly I think they are genuine in wanting a democratic Libya and in their hopes for a free country," Hague said.

Meanwhile, NATO aircraft carried out sustained airstrikes against targets in Tripoli Sunday, including command and control centers, several military support facilities and anti-aircraft weapon sites, according to a statement from NATO headquarters.

"The targets that were struck overnight were vital to the pro-Qadhafi forces' ability to harm the civilian population - essentially they are the hub of Qadhafi's command network," said Lieutenant-General Charles Bouchard, Commander of Operation Unified Protector. "We will continue to erode its foundations until the violence against the Libyan population ends,"

U.S. Defense Secretary Robert Gates believes the sustained campaign is having an effect. "Day by day, Gadhafi is seeing the people that are closest to him walking away," he said Sunday on a visit to Afghanistan. "... clearly the continuing pounding he is taking, the isolation, is all having an effect. The entire international community is basically saying he's got to go, a lot of sanctions (are) in place, the bombing continues against his forces.

"The opposition has been able to not only hold where they are in the east, they've been able to expand their security area around the coastal city of Misrata, and the guys in the west are holding their own," Gates added. "So I guess my forecast could be that it's only a matter of time. I don't think anybody knows how long, but I think we see signs the regime is getting shakier by the day and it's just a question of when everybody around Gadhafi decides that it's time to throw in the towel, and throw him under the bus."

Also Sunday, a string of explosions -- at least 6-- rocked the Libyan capital, CNN journalists reported. One of the explosions struck an old military station about 25 kilometers (16 miles) south of the city, a government official said.

A resolution approved by the U.N. Security Council in March authorized member states "to take all necessary measures to protect civilians under threat of attack in the country, including Benghazi, while excluding a foreign occupation force of any form on any part of Libyan territory."