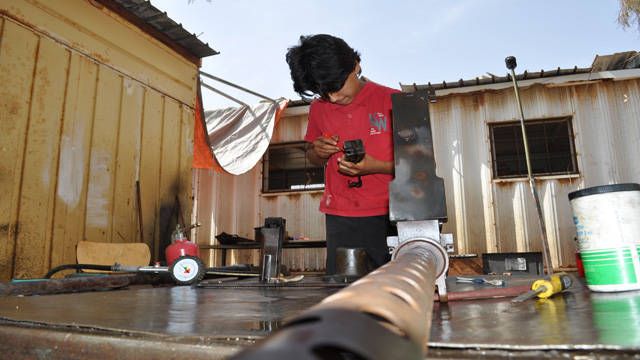 Misrata, Libya (CNN) -- The eyes of 15-year-old Nasser are fixed on a small metal part that belongs to a massive metal gun. He scrubs every tiny little crevice with a toothbrush until the bristles bend in awkward directions from the strain.

This is how he now spends his time six days a week for 10 hours a day in the open yard of a makeshift weapons workshop.

Nasser is one of Misrata's children. A boy who for more than 100 days suffered the frightening sounds of rockets falling from the sky and tanks blasting their way through the city as government forces battled to control the uprising against it from Misrata's citizens.

"It was really scary," he said. "People really suffered especially during the first days of the war. There was not really anything, we lacked everything."

Four months later school is still out but the fighting has been pushed to three fronts outside the city. There is little for children to do. Nasser has found something along with a few other boys and he dismisses those who say children shouldn't be working on machines of war.

"I'd tell them to get back to work and try to understand the situation we are living these days," the 15-year-old said and quietly went back to putting together the gun he had just finished cleaning.

The adult men working in the same area have nothing but good things to say about the effort the youth are making even the youngest among them.

"When I saw our young people my feeling is great," Ali Mohamed said. "Our children, they will be the future of our country and they should know how they defend our city."

The reality is rebel fighters are short on gun power and need whatever help they can get in order to obtain more weapons. They say defending the city means using all kinds of makeshift weaponry on Misrata's three battlefronts. The heaviest and most powerful guns are usually attached to pick-up trucks.

The guns are often taken off tanks and re-purposed elsewhere. The tanks that are captured are usually burned or otherwise rendered useless but there are a few that have survived intact, and yet with all the shortages of weaponry not one is being used on Misrata's front lines.

"We cannot use the tanks because we received orders from NATO not use them so they put restrictions on how we can use them," rebel fighter Mohamed Wabash tells CNN.

There is frustration setting in as opposition fighters have also been told to hold their positions but in this spontaneous uprising, war has not been meticulously planned. Strategies are being hatched in real time as the fighting rages on.

But rebels on Misrata's western front made an unexpected move forward after they say Gadhafi forces tried to once again advance toward the city. Rebels fought back with all their make-shift weapons and managed to push Gadhafi forces three kilometers west inching them that much farther toward the rebels goal, the capital of Tripoli.