From Isma'il Kushkush, For CNN 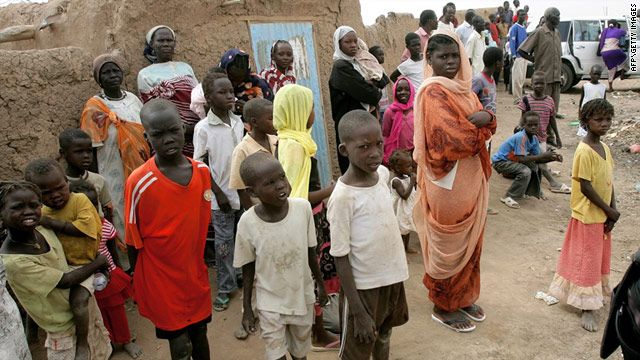 Children and women look on at the Mandela camp for displaced southern Sudanese, 30 kilometers south of Khartoum, on May 22.
STORY HIGHLIGHTS

"I visited Abyei and I am concerned not only of the destruction, massive displacement of the residents, and the attendant human rights crisis, but also the future status and security of the residents of Abyei," Justice Mohamed Othman Chande said Wednesday at a news conference in Khartoum.

"I received allegations of killings, rape and other forms of inhuman and degrading treatment during and subsequent to the attack."

Recent fighting in the district of Abyei broke out May 19 when southern Sudanese forces attacked a U.N. Mission in Sudan convoy escorting northern Sudanese Armed Forces.

Read the Q&A on Abyei, a contested territory on the border

The attack, which resulted in the deaths of at least 22 soldiers, led to retaliation by the Sudanese army, which took control of the town and expelled southern Sudanese units.

The Sudanese's army's takeover over of Abyei was followed by violence that led to looting and the displacement of thousands.

The U.N. Security Council condemned the violence in the disputed Sudanese region and called on the government in the north to pull out its troops.

Al-Sawarmi Khalid, spokesperson for the Sudanese Armed Forces, on Tuesday criticized the United Nation's description of military operations in South Kordofan and Abyei, according to the Sudanese Ministry of Defense's website.

Chande was also critical of the state of humanitarian assistance and freedoms in Darfur.

"I note with concern that humanitarian assistance to IDP (internally displaced persons) camps is strictly limited in south Darfur," he said.

"The state of emergency in Darfur continues to curtail fundamental rights and freedoms, [including] arbitrary arrests and prolonged detentions without judicial oversight," he added.

Chande's report also criticized "the continued fighting and hostilities that have and are taking place between the SPLA (Sudanese People Liberation Army) and rebel militia groups, which have resulted in the killing of civilians" in southern Sudan.