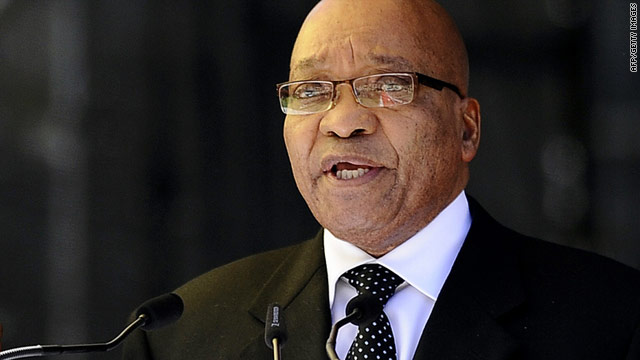 (CNN) -- The president of South Africa lashed out Tuesday at NATO's enforcement of the U.N. resolution authorizing the organization to act to protect innocent civilians threatened by Libya's civil war.

"We strongly believe that the resolution is being abused for regime change, political assassinations and foreign military occupation," said Jacob Zuma at a budget vote debate before the National Assembly in Cape Town.

"These actions undermine the efforts of the African Union in finding solutions to the problems facing its member states," he said in an appeal that called on all parties to respect international humanitarian law and called further for reform of the U.N. Security Council.

"We have spoken out against the misuse of the good intentions in Resolution 1973," said Zuma, who led two African Union delegations to Libya, where he met with leader Moammar Gadhafi in failed attempts to broker a cease-fire.

Unlike some other world leaders, Zuma has not called for the longtime leader to step down. Neither has Zuma's African National Congress party nor the African Union, which he was representing and which Gadhafi once led.

The AU also has criticized the NATO airstrikes.

In April, Zuma led an AU delegation to Tripoli, Libya's capital, where hopes were raised briefly when it was announced that Gadhafi had agreed, in principle, to the AU's "road map" proposal for peace.

U.S. officials and those of some other countries have called for Gadhafi to step down.

Separately, NATO refused to say Tuesday whether it would bomb ancient Roman ruins in Libya if it knew Gadhafi was hiding military equipment there.

"We will strike military vehicles, military forces, military equipment or military infrastructure that threaten Libyan civilians as necessary," a NATO official in Naples, Italy, said, declining to give his name in discussing internal NATO deliberations.

But he said the alliance could not verify rebel claims that Libya's leader may be hiding rocket launchers at the UNESCO World Heritage site of Leptis Magna, a Roman city between the capital of Tripoli and rebel-held Misrata.

Wing Cmdr. Mike Bracken, a spokesman for NATO's Libya mission, later said it "would be a concern for us that Gadhafi and pro-Gadhafi forces would choose to contravene international law in hiding themselves in such a location."

And, he said, "If we were to take on any targets, we would consider all risks." But he underscored that NATO could not confirm that weapons might be placed at the heritage site.

The Bracken briefing came a day after a top British military officer acknowledged that the bombing campaign was straining British resources.

"If we do it for longer than six months, then we have to reprioritize our forces," Adm. Mark Stanhope said Monday.

"That does not mean we won't be doing it," he added.

NATO recently extended its mission -- officially to protect civilians in Libya from Gadhafi's efforts to crush an uprising that has left rebels in control of parts of the country -- for another 90 days, into September.

British Minister of Defense Liam Fox said Tuesday that the Libya mission showed "how capable we are" and emphasized that the United Kingdom has the world's fourth-largest military budget.

Concerns over British capabilities were voiced as concern mounted in Washington about U.S. President Barack Obama's failure to seek the approval of Congress for the U.S. military action in Libya.

Asked whether Obama was violating the law by not having sought a formal authorization, the ranking member of the Senate Armed Services Committee said, "I think that you could make that argument, but it's also true that other presidents have ignored the War Powers Act in one way or another."

Still, any prohibition of ground troops would be not only inappropriate but unconstitutional, the decorated Vietnam War veteran added. "I believe that, if the Republicans continue to push such a thing, it could be viewed as partisanship in my view, because no one, no one believes that we are going to send ground troops into Libya. So, to have a, quote, prohibition for that could only mean that we are somehow taking shots at the president."

He predicted that the White House would send to Congress a report "and lots of information about what we've done" in the next day or so.

Guido Westerwelle said Germany had formally recognized the rebel Transitional National Council as the representative of the Libyan people, putting Berlin in line with the United States, France, Italy and a handful of other countries.