How will the Libya conflict play out? 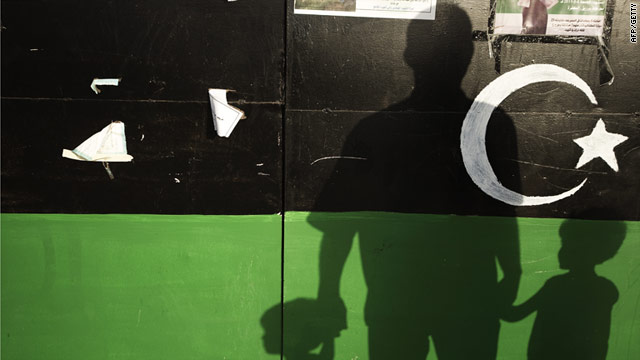 NATO Secretary General Anders Fogh Rasmussen has said the alliance will maintain pressure "for as long as it takes."
STORY HIGHLIGHTS

(CNN) -- With the conflict between Libyan rebels and Moammar Gadhafi's forces dragging on with little progress, questions have been raised over NATO's ability to bring resolution to the conflict.

Outgoing U.S. Defense Secretary Robert Gates has criticized the air campaign against Gadhafi saying shrinking military budgets have put the mission and future NATO operations at risk. His comments came as other NATO partners questioned their ability to sustain involvement.

NATO Secretary General Anders Fogh Rasmussen, who met British Prime Minister David Cameron on Tuesday, has said the alliance will extend its mission 90 days beyond the end of June and maintain pressure "for as long as it takes."

But with cracks appearing in the coalition and the comparative lack of progress since early gains when the campaign started in March, is it time to explore other options? If, so, what options are available, and what is the likelihood they will succeed?

CNN has been speaking with analysts to weigh some of these alternatives to ending the conflict in Libya:

1. Continue with the current NATO campaign
It is possible NATO will carry on with few changes to the current mission, but complaints of resources under strain indicate a resolution is needed sooner or later. David Hartwell, a Middle East and North African security expert with IHS Jane's, says this is only likely to result in success if an increasingly unlikely mass defection of Gadhafi stalwarts, a major uprising in Tripoli and a dramatic opposition offensive combine to topple the Libyan leader.

"There are question marks whether this will work because even though there have been a series of defections, that has conversely led to a tightening of the circles around Gadhafi to a point where you've got the hardcore loyalists," he said.

2. Stepping up NATO efforts, including putting coalition boots on the ground or directly targeting Gadhafi
Most analysts agree, NATO's original mission of preventing civilian casualties has expanded to securing Gadhafi's exit, with some claiming the coalition is already directly targeting the Libyan leader. Few, however, believe the mission will be stretched to allow deployment of NATO troops -- other than military advisers -- within Libya, particularly given the lack of interest from alliance partners for stepping up their commitment.

"While the tempo of the onslaught will be ratcheted up, there is no way NATO allies will allow this to spiral into a no-drive zone with troops on the ground," says Barak Seener, a Middle East expert with the Royal United Services Institute for Defence and Security Studies.

Ben Barry, military analyst for the International Institute for Strategic Studies, says further targeting of Gadhafi could result in a dramatic increase in civilian casualties: "Gadhafi will be straining every sinew not to be targeted. But it seems to me there is a positive point about the campaign in that NATO seems to be making extraordinary efforts to avoid civilian casualties and collateral damage and this seems to have been more successful than in any other air campaign in history."

3. A full withdrawal of NATO
For NATO to pull out of its Libya mission after securing a U.N. Security Council resolution to mandate air strikes would be a disaster for the rebels, says Barry. In addition, Seener argues that such a move would do too much harm to NATO's credibility for it to be an option; particularly as it "risks losing face to Robert Gates' criticism."

4. Negotiating an exit for Gadhafi; perhaps securing exile in a friendly country and immunity from prosecution
While he could theoretically seek exile in a friendly country that does not recognize the jurisdiction of the International Criminal Court, the promise of immunity is key, says International Crisis Group's Hugh Roberts, who writes in a recent report: "To insist that [Gadhafi] both leave the country and face trial in the International Criminal Court is virtually to ensure that he will stay in Libya to the bitter end and go down fighting."

That said, most analysts agree that exile will only be a last resort possibility for Gadhafi. Some believe it can never be an option. According to Seener: "Gadhafi is unwilling to leave the country and -- being a deluded, megalomaniac despot -- he is in denial of his losses and perceives it his right to maintain a position of total power. This is his oxygen and the only alternative is for Gadhafi to die in Libya."

5. Finding a diplomatic solution that allows Gadhafi to remain in Libya in some role
At issue here is whether Gadhafi can be trusted. Hartwell says a solution that sees him retain a role, even in a transitional capacity is unlikely to win support among the rebels and some of NATO's more outspoken members. To this end, efforts by the African Union and South Africa to bring both sides to the negotiating table have had little success.

With Gadhafi having burned bridges with Western allies, there is now no guarantee he will not ignore the terms of any peace deal and revert to his previous role as an international troublemaker, Barry says.

"If Gadhafi remains in power, is there not a high probability he will return to his previous behavior; a serial sponsor of terrorism, including a supplier of the IRA; a serial interferer in the affairs of his neighbors; and of course someone who had weapons of mass destruction?"

6. Bypassing the United Nations
While NATO is currently limited to air strikes by the Security Council resolution that mandated intervention, Barry argues there could be another legal route to deploying international ground troops. This rests on the recognition by other nations of the rebel Transitional National Council as the legitimate government of Libya.

"There's nothing to stop that legal and legitimate government, as they see it, approaching those nations for direct help under the various elements of the U.N. charter that cover the right of self-defense. And there's nothing to stop those countries, whether or not they're members of NATO, from giving lethal or non-lethal aid or deploying their troops to support their new ally. And my interpretation of this is that it wouldn't require a new Security Council resolution."