School 'pays dowry' to save girls from being child brides 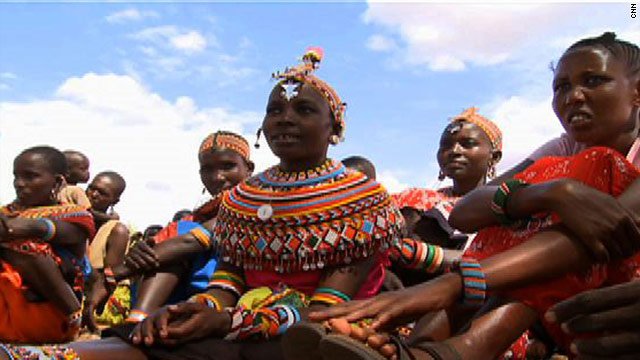 The Rift Valley, Kenya (CNN) -- For girls born into some Kenyan tribes, traditions such as childhood marriage, genital mutilation and even sanctioned rape are a fact of life.

But a school set up for Maasai girls deep in Kenya's Rift Valley is helping girls by trading in early marriage for education.

Child marriage is common among the Maasai people, according to charity Childfund International, which opened the Naning'oi Girls Boarding School in 1999. It says the Maasai dowry practice of "Esaiyata" allows girls to be "booked" at birth for an early marriage.

The school uses that same tradition to give girls an education. It offers to pay the traditional dowry of livestock or gifts that is usually paid to a young girl's father by her future husband.

But instead of "booking" the girls for marriage, it is booking them a place at the school.

For the past decade the school's principal, Teresia Tikoishi, has been on a mission to stop traditional practices that harm girls and focus on their education instead.

"The traditions should not continue because we are losing so many girls from school through the traditions," she said.

Tikoishi explains that at her school the young girls are given the chance to be children, but at home they are told by their mothers that they are women or somebody's wife.

The women is just to give birth and work in the home according to the family...
--Teresia Tikoishi, headmistress Naning'oi boarding school
RELATED TOPICS

The first class to attend the school graduated this year. Tikoishi believes that if the girls don't come to the school they will have to go through things that they are too young to handle.

"You find them even having trouble giving birth because it's like you have gone to the forest and you have plucked a fruit that is not yet ripe," she continued. "They are too young to carry a pregnancy."

Another form of "booking" young girls is carried out by the Samburu tribe. The practice known as "beading" is a way of booking girls for marriage, and a also way for a close family relative to become temporarily "engaged" to a girl, according to activist Josephine Kulea.

Girls as young as six will have intricate beaded necklaces placed around their necks by a family relative. The act signals a temporary engagement between them and means the man can have sex with the girl.

But girls are not allowed to get pregnant, leading to crude abortions and unwanted infants being given away, says Kulea.

Tikoishi says these tribes are very much male dominated. "It's part of the culture -- the man speaks and gives the orders and you follow," she explains. "The mother has no choice and neither does the child. They are there to listen and do."

The headmistress explains that as a woman, it is harder for her to get her message across to Maasai tribes.

"I have to lie low," Tikoishi said. "If I want to make them understand something I have to make sure it's not coming from my mouth and have a document from the government that says we have to do A, B and C."

Tikoishi added that it is time for attitudes to change.

"The woman is just to give birth, work in the home according to the family, and cook the food, make the house, get firewood, fetch the water and that's all," she said.

"Life is not how it used to be so that's why we are telling them no, the women should be assisted," she added. "Even in the Bible, Adam was given a helper -- not a slave."