At least 5 dead in attack on police headquarters in Nigeria 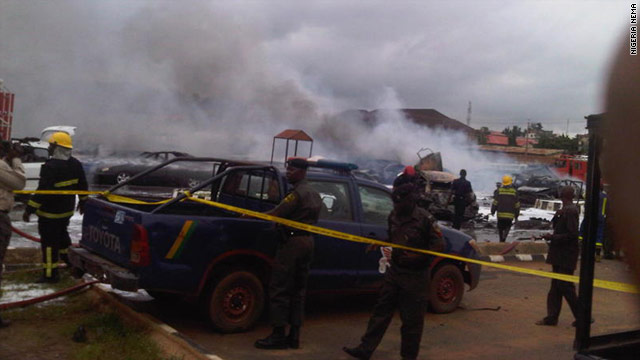 Abuja, Nigeria (CNN) -- A bomber whose blast Thursday killed at least five people, including himself, at police headquarters in Nigeria's capital was probably targeting the inspector-general of police, a security source who has spoken to investigators told CNN.

The incident occurred at 11 a.m. in Abuja, when the car carrying the bomb followed the convoy of Inspector-General Hafiz Abubakar Ringim as it entered police headquarters. It detonated less than two minutes after Ringim had left the convoy and entered the building, the source said.

The source questioned Ringim's official characterization of the blast as a suicide attack, suggesting instead that the detonation may have been triggered by accident.

Emergency workers used body bags, ambulances, a hydraulic spreader and cutters to deal with the aftermath of the bombing. Thick, black smoke billowed, and flames melted cars in the parking lot.

"It's serious, very serious, as so many cars are on fire," said Umar Mariga, the National Red Cross spokesman.

"The body of the suicide bomber has been recovered and a full investigation has commenced," Ringim said. "Members of the public are assured that the criminal elements behind this dastardly attack will be fished out as the government, the police and other security agencies will not succumb to the demand of any criminal group or individual."

The National Emergency Management Agency mobilized response units to the scene, close to the Hilton Hotel in central Abuja.

It was unclear who was responsible for the blast. However, the militant Islamist group Boko Haram has been targeting police and the government in recent attacks.

If the attack was indeed a suicide bombing, it would be a new and worrying phenomenon in Nigeria, said Richard Downie, deputy director of the Africa Program at the Washington-based Center for Strategic and International Studies.

In a separate incident, four children were killed and another was wounded in a roadside bomb blast at 1 p.m. in Damboa, in northeast Nigeria's Borno state, said Abdullahi Lawa, a Borno state police spokesman.

No one immediately claimed responsibility for the explosion.

On June 8, a pair of explosions at a police station and a church in northeast Nigeria killed 11 people. The gunmen who attacked the Gwange police station with explosives were believed to belong to Boko Haram, a sect that has challenged Nigeria's government and is blamed for hundreds of deaths in Nigeria over the past decade.

It launched attacks on government buildings across northern Nigeria in July 2009. After a week of fighting, an estimated 700 people had been killed, and the uprising was eventually put down. But attacks and killings continue as Boko Haram pursues its aim of enforcing its version of Islamic law, or sharia, across the north.

The group is also thought to have been behind a series of recent bombings in the wake of the re-election of President Goodluck Jonathan, a Christian from the south.

Downie said Nigeria offered an amnesty deal to Boko Haram, but Ringim vowed to rid the country of the militant group, which analysts say prompted the group to reject the government's offer and put police in the line of attacks.