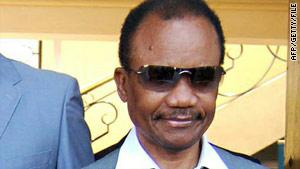 (CNN) -- The first democratically elected president of Zambia, who become the focus of a lengthy corruption trial during his retirement, died at his home early Saturday, his spokesman said.

"The death was a surprise for us because he was normal during the day," spokesman Emmanuel Mwamba said by phone from Lusaka. "He met some people, had appointments and consulted. It was a normal day."

Mwamba said a doctor came to the former leader's home hours before he died after he complained of stomach pains. He was treated and appeared fine, but later became unconscious.

He died surrounded by his wife and some relatives, the spokesman said.

The former president suffered from heart problems during his retirement and had undergone treatment overseas.

Chiluba took over after 27 years of one-party rule under strongman Kenneth Kaunda.

In the early stages of his presidency, Chiluba became popular for setting up political reforms in the nation. He later resorted to an autocratic rule that especially targeted opposition rivals and outspoken journalists.

An attempted military coup to oust him in 1997 failed, leading Chiluba to throw some of his opponents in prison, including Kaunda.

After unsuccessfully trying to amend the constitution to extend his two terms in office, Chiluba handed over to his hand-picked successor, Levy Mwanawasa.

Shortly after the successor took office, he turned on Chiluba and called for a corruption trial against him.

A London court convicted him of fraud in absentia and ordered him to repay millions of dollars in government funds, but Zambia did not honor the ruling. The trial was held in London because some of the alleged corruption occurred there.

Chiluba accused Britain, which colonized Zambia, of interfering with the nation's judicial system.

Zambia acquitted him of additional corruption charges in 2009.

Journalist Chibaula Silwamba contributed to this report from Lusaka, Zambia