Gadhafi calls for UN to investigate NATO attack in Surman 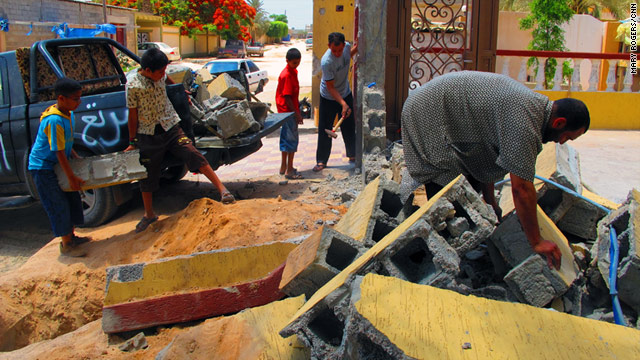 (CNN) -- Libyan leader Moammar Gadhafi called Thursday for the U.N. Security Council to carry out an independent fact-gathering mission on Monday's NATO attack in the city of Surman, which resulted in civilian casualties.

"The Security Council should hold an urgent meeting to discuss the matter and stop this barbaric attack," he said in a nationally televised address.

In the attack, five houses were hit in Surman, which is west of Tripoli, and 15 people died, including three children, according to a government spokesman.

NATO has said the target was a command-and-control communications node involved in coordinating attacks on the Libyan people. "While NATO cannot confirm reports of casualties, we would regret any loss of civilian life and we go to great lengths to avoid civilian casualties," the organization said on its website. "This is in stark contrast to the Gadhafi regime, which continues its policy of systematic and sustained violence against the people of Libya."

But Gadhafi angrily rejected the claim that the compound was anything but a residential area. "This is not a military factory, munition factory or military port or a fortified castle," he said as video lingered over rubble. "It has no military identity."

"This is the jungle rule," he continued. "The infidels rule. You don't have any conscience."

He blamed the members of the Security Council who approved the resolution in March that authorized the use of military force to protect unarmed anti-government Libyan demonstrators.

"You will be responsible for any outcome," he threatened, "And you will regret it."

Gadhafi then directed his vitriol toward the "so-called heroic pilots" who flew the NATO planes involved in the attack. "You know we don't have any air defenses or military planes," the Libyan leader said, referring to the no-fly zone that NATO has imposed over Libya. "You have long-range rockets and you have been flying over the Libyan air territory without any deterrent."

He said NATO's true motivation was inspired by hatred. "You hate us because we are Muslims," Gadhafi said. "You hate Libya and people who bear witness to Allah and Mohammed. You bomb them."

Gadhafi's late-night diatribe came hours after China embraced the Libyan opposition as "an important dialogue partner" and urged an end to the fighting and a political solution to the crisis, state media said.

"China is not seeking any private interest concerning Libya, and believes the Libyan situation is essentially an internal issue," said Foreign Minister Yang Jiechi after meeting with Mahmoud Jibril, chairman of the executive board of Libya's National Transitional Council.

Jibril's was the first visit by a Libyan opposition leader. He arrived in China on Tuesday, according to the state-run Xinhua news agency.

For the sake of the Libyan people, Yang called on the two sides to "truly give peace a chance."

Also Wednesday, Italian Foreign Minister Franco Frattini urged an end to the fighting in Libya to allow for humanitarian aid to flow to the war-devastated North African nation.

Speaking in Parliament, Frattini said Italy backs a cessation to hostilities to negotiate a way for a humanitarian corridor.

Frattini's comments came after he had been critical of reported civilian casualties in NATO airstrikes and said they threatened the credibility of the alliance.

At a weekend summit in Cairo, U.N. Secretary-General Ban Ki-moon said Libya was facing shortages of food, fuel and medical personnel and access to water services was dwindling.

"The U.N.'s humanitarian efforts are taking place under extremely difficult circumstances," he said.

The Libyan war erupted from anti-government protests in February. Following a U.N. mandate to protect civilians, NATO began bombing military targets in March. However, Gadhafi still maintains control in Tripoli and other cities.

Meanwhile, pressure has mounted from U.S. lawmakers to withdraw backing for the mission.

"We've been in this conflict for 90 days and the president hasn't talked to the American people for four or five weeks about why we're there, what our national interest is, and why we should continue," Boehner said.

The day before, Senators John Kerry, D-Massachusetts, and John McCain, R-Arizona, introduced a resolution to counter some of the criticism about the U.S. role in Libya.

That resolution authorizes the commitment of U.S. forces for one year while stressing the lack of support for any use of American ground troops.