Attackers rape more than 170 women in raids on Congo villages 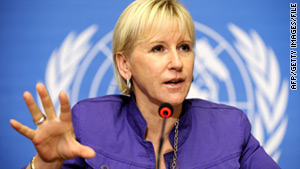 (CNN) -- Over the course of two June nights, attackers plundered villages in the far east of the Democratic Republic of Congo. They stole medicine from the local health center, goats from farmers, cell phones, motorcycles and other property from residents. Before fleeing, they raped and beat more than 170 women.

The women were as young as 17, as old as 90, according to a United Nations official, who was not named because he is not authorized to speak to the media. The attacks took place in the villages of Nakyele and Abala.

The humanitarian group Medicins San Frontieres reported Thursday that its medical teams in the Fizi area of Sud Kivu province had treated about 100 women for rape, abuse and trauma. It was the latest in many such incidents that have earned Congo the ignominious title of "rape capital" of the world.

Martin Nesirky, a spokesman for U.N. Secretary-General Ban Ki-moon, said the global body has received "several worrying reports about incidents of an unknown number of alleged rapes and looting."

The United Nations mission in Congo dispatched peacekeepers to Fizi to investigate the incident. Fizi is eight hours by foot from the nearest U.N. base and, like other towns and villages in Congo, is difficult to access because of harsh terrain and a lack of infrastructure.

"People are in total despair," Jean Marie Ngoma, a member of the provincial parliament, said on U.N.-backed Radio Okapi.

Amnesty International said the latest rapes were a result of the government's "horrific failure of justice."

It said members of the same armed group were previously implicated in rapes in the same area in January.

Amnesty cited local sources saying that a senior officer of the Congolese army, Col. Kifaru Niragiye, had recently learned that he was to be demoted and left a military training center June 9 with 150 soldiers. Amnesty said the group went on to raid the two villages near Fizi.

Kifaru's deputy and eight other men were convicted by a military court for crimes against humanity for the rape of at least 60 women in the January attack in Fizi, Amnesty said.

"The inability of the Democratic Republic of Congo to bring to justice members of its own army and armed groups for crimes under international law has fostered a culture of impunity, leading to attack after attack against civilians," said Erwin van der Borght, Amnesty International's director for Africa.

A five-year war in which more than 5 million people died ended in 2003, but violence is still widespread in eastern Congo. Sexual violence is especially prevalent, prompting Margot Wallstrom, the U.N. special representative on sexual violence in conflict, to call Congo the rape capital of the world.

The United Nations documented 7,500 cases of sexual violence against women and girls in North and South Kivu over the first nine months of 2009. The fear was that many rapes had gone unreported.

"Most of the women and girls were gang-raped, some so violently that they later died," according to a report by Human Rights Watch, which said both the army and the rebels held women and girls as sex slaves, raped them repeatedly, and then mutilated and killed some of them.