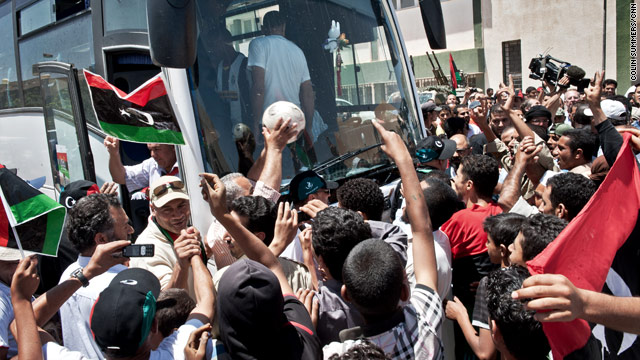 Tripoli, Libya (CNN) -- NATO airstrikes hit a bakery and a restaurant in the Libyan city of al-Brega Saturday, killing 15 civilians, a Libyan government official told CNN, though the alliance countered that claim.

NATO said it had struck key command-and-control centers. The alliance said there was "no indication of civilian casualties in connection with these strikes."

Libyan leader Moammar Gadhafi's forces have occupied buildings in an abandoned area of al-Brega from where they are launching attacks on civilians, a NATO statement said. The alliance monitored the buildings and said it determined them to be clear military targets.

"This continues to show Gadhafi's reprehensible tactics of placing military assets and operations at the heart of civilian neighborhoods," said Lt. Gen. Charles Bouchard, NATO commander for the Libya campaign.

"We have meticulously monitored these developments for a significant period and it was time to remove this threat," he said.

Al-Brega is a key oil refinery town about 500 miles east of Tripoli that has been the scene of heavy fighting between pro-Gadhafi forces and rebel fighters.

Abdul Hafiz Ghoga, a spokesman and deputy chairman of the opposition's Transitional National Council, said Gadhafi bears a lot of the responsibility for civilian casualties in the fighting as the Libyan leader keeps weapons near where people live, echoing the comments of the NATO commander.

Also Saturday, Libyan state TV said NATO strikes hit Gharyan, a city in the west. The report cited an unnamed military source who said a number of people were killed and wounded in the attack. CNN could not independently confirm the claim.

Despite the airstrikes, an armed rebel movement and several high-profile defections, Gadhafi has held onto power.

Seventeen prominent soccer players in Libya have defected, plus 38 military officers, including six high-ranking officers, according to Ghoga.

Hopes for a political solution are at a stalemate over opposition conditions that Gadhafi must leave the country before any negotiated settlement can take hold.

Libyan government officials have said repeatedly that Gadhafi's departure cannot be a prerequisite to talks.

Over the last three months, panel members have met with both Gadhafi and opposition leaders.

Ahead of the meeting, human rights activists urged the African Union to prioritize the issue of the plight of civilians caught in armed conflicts, including Libya.

Both Human Rights Watch and Amnesty International have blamed the Gadhafi regime for violations of human rights, including indiscriminate fire on civilians, the use of internationally banned cluster bombs and the torture and executions of captured fighters.