African Union: Gadhafi will not be part of peace negotiations 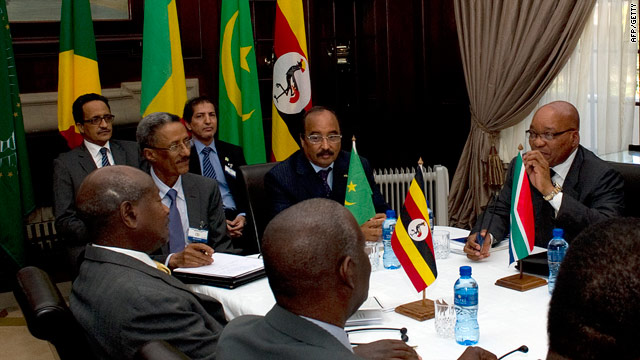 (CNN) -- Libyan leader Moammar Gadhafi will not be part of the African Union's next attempt to map out a peace deal in the war-torn nation, the organization said in a statement Sunday.

"The AU high-level ad hoc committee welcomes Colonel Gadhafi's acceptance of not being part of the negotiation process," the statement said.

It was unclear who would represent the Libyan government in negotiations, or when negotiations would occur. Journalists were not allowed to ask questions at a news conference after Sunday's meeting of the African Union's special committee on Libya in Pretoria, South Africa.

Members of the committee have met with Gadhafi and opposition leaders over the past three months. Another African Union-led attempt to broker peace between Gadhafi and the rebels fell through in April.

Protesting for, against Gadhafi in Libya
RELATED TOPICS

South African President Jacob Zuma told the committee Sunday that continued bombing by NATO and its allies was a "concern," since protecting the Libyan people was the intention behind a U.N. resolution authorizing the use of force in the North African nation.

"The intention was not to authorize a campaign for regime change or political assassination," he said.

The committee repeated calls Sunday for a cease-fire between the Libyan government and rebels.

"Only a political solution will make it possible to sustainably settle the current conflict," the statement said.

It also urged the temporary "stopping of NATO bombings" to allow delivery of humanitarian aid.

"Civilian lives have been lost due to these bombings, and civilian infrastructure has suffered untold damage," Zuma said.

Ahead of Sunday's meeting, human rights activists urged the African Union to prioritize the issue of the plight of civilians caught in armed conflicts, including Libya.

The meeting followed claims a day earlier by the Libyan government that NATO warplanes bombed a bakery and a restaurant in a key oil refinery town east of Tripoli, a charge the alliance has countered.

Gadhafi has been a strong supporter of the African Union and has channeled large sums of money its way. Libya also holds a seat on the 15-member Peace and Security Council, which is headed by Lamamra.

The African Union's committee on Libya includes representatives from Mauritania, the Democratic Republic of Congo, Mali, Uganda and South Africa.

Opposition leaders had voiced doubt that any mediation involving that multinational group would end the conflict in a way that would satisfy their goals, which include Gadhafi's ouster.

In its proposed agreement in April, the African Union said Gadhafi had agreed in principle to stop all hostilities and allow outside forces to help keep the peace.

But rebels rejected the non-binding proposal, saying it did not address whether Gadhafi would step down or provide any solution to the violence against the Libyan people.

Both Human Rights Watch and Amnesty International have blamed the Gadhafi regime for violations of human rights, including indiscriminate fire on civilians, the use of internationally banned cluster bombs and the torture and executions of captured fighters.

On Sunday, an International Committee of the Red Cross ship arrived in Tripoli from the rebel stronghold of Benghazi with about 100 people on board. It was the second time in a week that the ICRC has reunited friends and families between the the eastern opposition-controlled city and the western regime-controlled city.

NATO began bombing military targets in March after the U.N. Security Council issued a resolution authorizing force by whatever means necessary, with the exception of a ground invasion, to protect civilians.

Libya accused NATO on Saturday of killing civilians in airstrikes, with NATO responding that it struck key command-and-control centers. The alliance said there was "no indication of civilian casualties in connection with these strikes."

Gadhafi's forces have occupied buildings in an abandoned area of al-Brega from where they are launching attacks on civilians, a NATO statement said. The alliance monitored the buildings and said it determined they were clear military targets.

"This continues to show Gadhafi's reprehensible tactics of placing military assets and operations at the heart of civilian neighborhoods," said Lt. Gen. Charles Bouchard, NATO commander for the Libya campaign.

"We have meticulously monitored these developments for a significant period and it was time to remove this threat," he said.

Al-Brega is a key oil refinery town about 500 miles east of Tripoli that has been the scene of heavy fighting between pro-Gadhafi forces and rebel fighters.

Abdul Hafiz Ghoga, a spokesman and deputy chairman of the opposition's Transitional National Council, said Gadhafi bears a lot of the responsibility for civilian casualties as the Libyan leader keeps weapons near where people live.

Also Saturday, Libyan state TV said NATO strikes hit Gharyan, a city in the west. The report cited an unnamed military source who said a number of people were killed and wounded in the attack. CNN cannot independently confirm the claim.