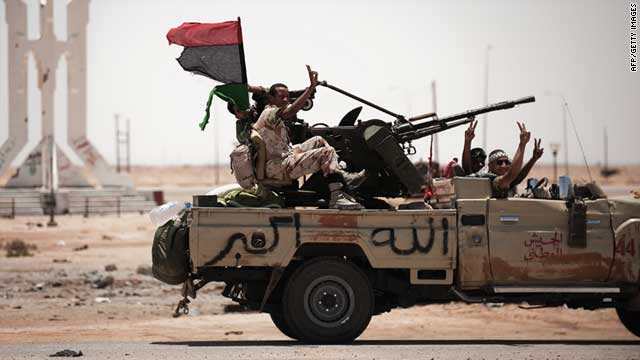 Libyan rebel fighters flash the victory sign as they drive on June 11, 2011 in Ajdabiya, south west of Benghazi.
STORY HIGHLIGHTS

Misrata, Libya (CNN) -- The French government is in talks with Libyan rebels about supplying them with weapons and ammunition, a Libyan opposition military spokesman in Misrata said late Thursday.

The French government has not confirmed the claim, which follows an acknowledgement earlier this week that its military has previously dropped light weaponry to rebels elsewhere.

Ibrahim Baitalmal, the spokesman for Misrata's Military Council, said that if the French agreed to help in Misrata, anti-Gadhafi forces there would receive much needed supplies to fight against Libyan leader Moammar Gadhafi's forces.

Misrata is surrounded on three sides by Gadhafi's forces, which are much better armed. The city's only outlet is by sea.

Libyan state TV reported Friday that NATO had attacked targets in the city of Gharyan, south of the capital, Tripoli.

It also reported that pro-Gadhafi forces had bombed an opposition building in Tobruk, in the far east of the country.

Lavrov said that if confirmed, France's action was in violation of the U.N.resolution.

But speaking in Moscow Friday, French Foreign Minister Alain Juppe said his country's NATO partners and the U.N. Security Council had been told about France's decision to drop weapons for the Libyan opposition.

"We are exactly within the framework of resolutions 1970 and 1973... all means can be used to help civilian populations to protect themselves," he said.

"It's within that framework that we reacted. We informed our NATO partners and the Security Council."

"It became clear that people there were defenseless and very much threatened by Gadhafi's forces," he said. "The weapons were given for self defense because of the security situation."

Speaking at a news conference Thursday, Libyan Prime Minister Baghdadi al-Mahmoudi said rebel forces were receiving arms from France but were not trained in their use.