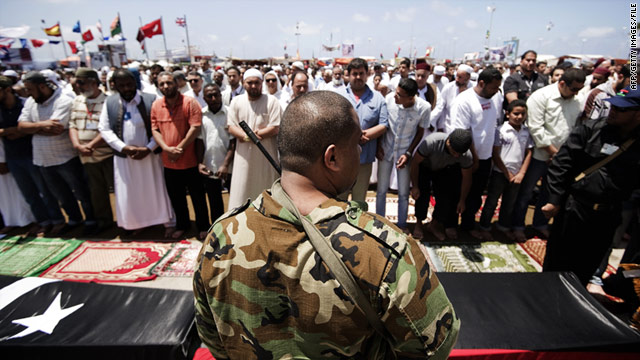 A file photo of armed Libyan rebels standinjg next to coffins in Benghazi on June 10, 2011.
STORY HIGHLIGHTS

Dafniya, Libya (CNN) -- Libyan rebels and troops loyal to Moammar Gadhafi shelled each other for hours on Saturday in clashes at the highly contested frontline of Dafniya, an embattled town just west of the besieged port city of Misrata.

At least 11 rebels were wounded in the exchange of fire and treated at one of the two field hospitals in what has been the most active day in Dafniya this week, according to a CNN team.

Heavy government shelling on Misrata and Dafniya began shortly after Gadhafi rallied his supporters in an audio message on state TV and threatened to take the fighting to Europe in retaliation for NATO's bombing campaign.

"As soon as Gadhafi's speech ended, they started shelling Dafniya and around midnight there was a salvo of about eight rockets inside Misrata itself, and it continues on the front this morning," said CNN's Ben Wedeman, who was in Misrata Saturday.

Gadhafi has vowed vengeance for NATO bombings in Libya. He said the Libyan military could be "like locusts, like bees" in Europe, potentially targeting homes and offices.

Gadhafi referred to NATO, which began bombing military targets in Libya after the U.N. Security Council approved a resolution in March authorizing force by whatever means necessary -- with the exception of a ground invasion -- to protect civilians.

NATO's "aggression is killing our children (and) Europe will have to face the consequences," he said. "You will have people attacking Europe, joining terrorist organizations against Europe, and building a culture that makes legitimate all violence against Europe."

"The rebels have no future," he added. "They know it and they are terrified."

On Saturday, U.S. Secretary of State Hillary Clinton said the NATO mission in Libya is on track, with pressure on Gadhafi mounting and the rebel forces growing stronger.

"We need to see this through, and we are in complete agreement that we will," she said alongside the Spanish foreign minister in Madrid Saturday.

The events came one day after the African Union's special committee on Libya said it had officially presented a plan meant to help Libya find a way out of the current crisis. The proposal states that Gadhafi will not be part of the negotiation process, but stops short of saying he should step down.

"It is envisaged to convene, soon, in Addis Ababa, (Ethiopia) negotiations between the parties to discuss these proposals," the group said in a statement.

Committee members have met with Gadhafi and opposition leaders over the past three months. Another African Union-led attempt to broker peace between Gadhafi and the rebels fell through in April.

The French government was in talks with Libyan rebels about supplying them with weapons and ammunition, a Libyan opposition military spokesman in Misrata said Thursday.

CNN's Ben Wedeman and David McKenzie contributed to this report.