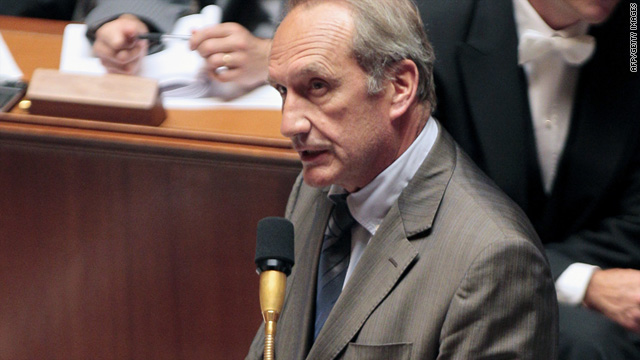 United Nations (CNN) -- In a contentious closed-door U.N. Security Council meeting Tuesday, Russia criticized France's decision to airlift weapons to rebel forces in Libya, according to a Western diplomat present during the discussions.

Earlier Tuesday, French Defense Minister Gerard Longuet told reporters that parachute drops of weapons into the North African nation were "no longer necessary" because opposition forces had become organized enough to procure their own arms.

"This autonomy allows them to build relationships with external partners, including when it comes to equipping themselves in self-defense," he said.

But even as Longuet said the weapons drops were no longer needed, debate over the approach continued.

Russia brought up the issue at the U.N. Security Council session Tuesday, arguing that by sending weapons, France had violated the council's resolution that authorized NATO force in Libya, the Western diplomat said.

France offered a detailed defense of the country's actions, arguing that supplying weapons was "the only practical way of fulfilling" the council's mandate authorizing force to take "all necessary measures" to protect civilians, the diplomat said.

During Tuesday's meeting, ambassadors from the United Kingdom and United States defended France's actions, according to the Western diplomat.

France acknowledged last Wednesday that it had supplied weapons to anti-Gadhafi forces, saying the weapons were provided for self-defense.

"It became clear that people there were defenseless and very much threatened by Gadhafi's forces," French Ministry of Defense spokesman Colonel Thierry Burkhard said last Wednesday.

Libyan Prime Minister Baghdadi al-Mahmoudi told reporters last week that rebel forces were receiving arms from France but were not trained in their use.

Meanwhile, in Libya, a rebel spokesman said fighting had moved Tuesday westward from Misrata, which rebel forces say they continue to hold. Eleven rebels were killed in Dafniya, and one was killed in Zliten, said Mohammed Ibrahim, the spokesman. Another 60 rebels were wounded in the two cities, he said, citing figures from Al-Hekma Hospital, in Misrata.

Pro-Gadhafi forces fired some six rockets into Misrata, but they caused no casualties, he said.

The opposition website freemisurata.com, published by Ibrahim's group, said at least 20 members of Gadhafi's forces were killed and six were captured Tuesday in Dafniya and Zliten.

CNN's Richard Roth and Mick B. Krever and journalists Catherine Clifford and Dheepthi Namasivayam contributed to this report.