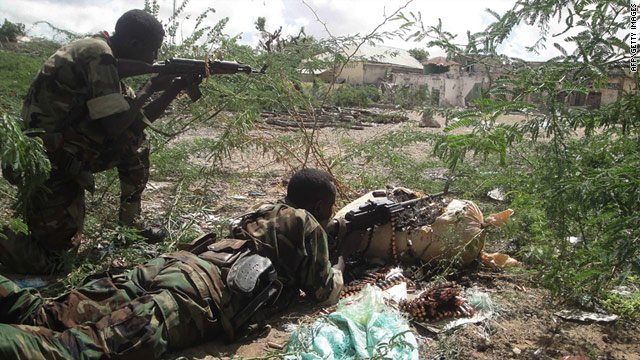 African Union soldiers during a firefight with Al-shabaab, an Islamist insurgent group, in Mogadishu, Somalia, on May 22.
STORY HIGHLIGHTS
RELATED TOPICS

Washington (CNN) -- The U.S. wants to test claims by Somalia's al Qaeda-linked group Al-Shabaab that it will lift the ban on relief organizations to avoid a humanitarian disaster caused by drought in the Horn of Africa nation, the State Department said Wednesday.

The Horn of Africa region is experiencing the worst drought in 60 years, with Somalia experiencing pre-famine conditions. Al-Shabaab said Tuesday it would lift a ban on foreign food agencies in drought-hit areas under its control.

The United Nations estimates 2.8 million Somalis need emergency aid. There are currently about 1.5 million internally displaced people, and the drought conditions have driven thousands of Somalis over the border into Kenya and Ethiopia.

Al-Shabaab banned foreign aid organizations from operating in the country in 2009, accusing them of being anti-Muslim. On Wednesday it reversed its stand, saying it welcomed help from any group which did not have a hidden agenda and has formed a committee to deal with the situation. The group urged all aid groups to co-ordinate their relief actions with the committee for access and assistance.

State Department spokeswoman Victoria Nuland said that the U.S. was "very concerned" about the drought and resulting food shortages. The U.S. has already delivered more than 1,900 metric tons of food aid through the World Food Program.

Nuland said Secretary of State Hillary Clinton tasked her staff Wednesday with looking at what else can be done to "avoid a major humanitarian catastrophe," including probing whether Al-Shabaab can be taken at its word.

"The secretary wants to ensure we do all we can to avoid a humanitarian disaster, and if Al-Shabaab is now saying it will allow these humanitarian efforts, then the international community should test that because they have been a problem in the past," Nuland said.