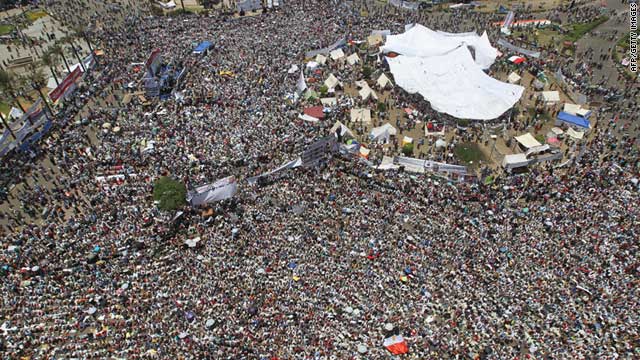 Cairo (CNN) -- Tens of thousands of Egyptians, angered by their nation's slow progress toward reforms, converged in Cairo's iconic Tahrir Square on Friday to pressure the interim government to speed up the process.

Protesters are determined not to leave until their demands are met, said Walid Rashid, one of the founding members of Egypt's pro-reform April 6 youth movement. Their intentions to stay were reflected in the number of tents that popped up in the square, the center of the revolution that ousted President Hosni Mubarak from power February 11.

Five months after that historic event, Egyptians are disgruntled with the slow pace of change.

Some protesters said they planned to remain in the square for 18 days, the length of the revolution.

In recent days, anti-government demonstrations have raged, sometimes devolving into clashes. On July 2, armed men attacked protesters at the square.

A group called the January 25 Coalition has issued a range of demands, calling for the removal of Cairo's head of security and an investigation into the violence at the rallies.

The group, named for the day anti-government protests began this year, also called for the release of those detained after the demonstrations.

Mubarak is scheduled to face the Cairo Criminal Court on August 3 on charges of corruption and deaths of protesters, officials said.

At least 25 former Egyptian government officials have been referred to the Cairo Criminal Court with charges related to the February 2 attack in Tahrir Square, known as the Battle of the Camel, said Adel Saeed, a spokesman for the general prosecutor's office.

They include former members of parliament, businessmen and members of the dissolved National Democratic Party. The suspects include Safwat El Sherif, the former head of the Shura Council, and Fathi Suror, the former speaker of the Egyptian parliament.