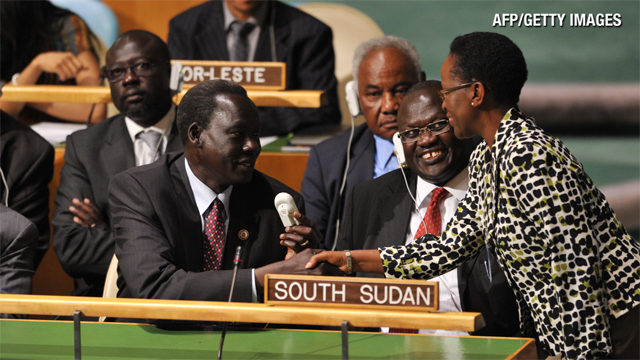 (CNN) -- South Sudan officially became the 193rd member of the United Nations on Thursday morning, capping a flurry of activities that started with its independence last week.

"We look forward to the Republic of South Sudan joining us as a member of the United Nations and to working closely with its representatives," Guido Westerwelle, the foreign minister of Germany, said in a statement Wednesday.

Germany is leading the Security Council this month.

South Sudanese celebrated their independence Saturday in a boisterous ceremony attended by world leaders, including Ban Ki-moon, the U.N. secretary-general.

The referendum was part of a 2005 peace deal that ended decades of civil war pitting a government dominated by Arab Muslims in the north against black Christians and animists in the South.

The two countries look set to divorce in name only -- they have not reached an agreement on the borders, the oil or the status of their respective citizens.

Ban urged north and South Sudan to work together, and said the United Nations has a crucial role to play in their success.

Meanwhile, the Sudan parliament has given preliminary approval to revoking citizenship of South Sudan nationals, according to SUNA, the state news agency.