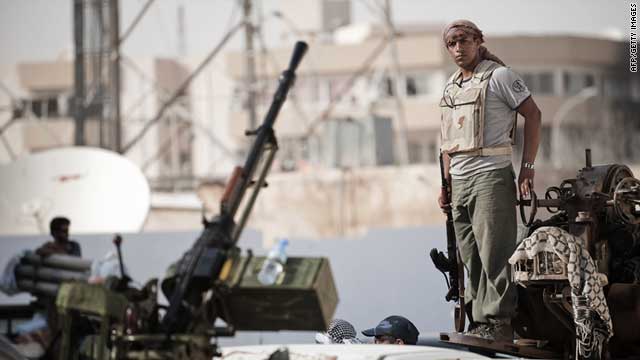 A Libyan rebel prepares to drive towards the Brega frontline from Ajdabiya on July 14, 2011.
STORY HIGHLIGHTS

Tripoli, Libya (CNN) -- NATO sloughed off an assertion of the Libyan government on Friday that the alliance and anti-government rebels were carrying out a coordinated air, sea and land attack on the strategic town of al-Brega.

"NATO's mission is to prevent attacks and threats against civilians and that is what we are doing," the alliance said in a statement. "NATO has no military forces on the ground and no direct contact with opposition forces.

"However, we do receive information from allied sources in Libya. We take this information into account to ensure that our actions are consistent with our U.N.-mandated mission to protect civilians."

In an unexpected late-night appearance before a hastily assembled group of journalists, a Libyan government spokesman on Thursday called the attack "heavy, merciless and surprising."

CNN was not able to reach anyone from NATO or the rebel Transitional National Council, based out of the opposition-held eastern Libyan city of Benghazi, to confirm reports of the al-Brega attack.

The government spokesman, Musa Ibrahim, also issued a warning that he said he hoped would make headlines around the world.

"We will die for oil. We will kill for oil," Ibrahim said. "We will kill everyone who comes near our oil. Rebels, NATO, we don't care. We will defend our oil to the last drop of blood that we have."

His comments came shortly after Libyan leader Moammar Gadhafi used similar imagery in pledging not to knuckle under to international demands that he cede the power he has held tightly for nearly 42 years, and instead said he would remain "until the last drop of my blood."

"It is impossible for me to leave my loyal people," he told an enthusiastic crowd numbering in the thousands in the western city of Agelat, in a speech that was broadcast over state television.