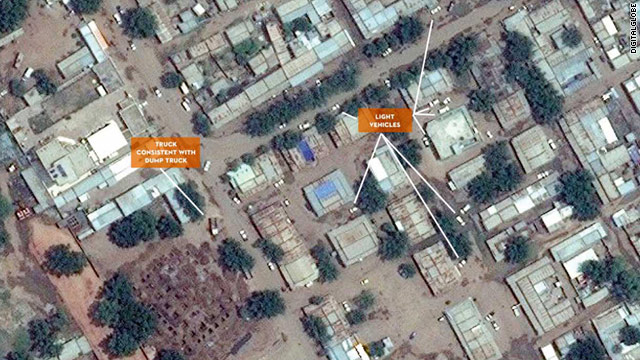 "The allegations contained in the report are extremely grave," said Philippe Bolopion of Human Rights Watch. "This report provides only a small window on what's happening in Southern Kordofan."

Reliable information about what is going on in the region is hard to come by. Due to the expiration of the mandate for the U.N. mission in Sudan, U.N. peacekeeping officials have no access to the affected areas.

"The Sudanese government is essentially kicking the U.N. out," Bolopion said. "This should raise a red flag."

"I am increasingly alarmed by the mounting allegations of mass graves in South Kordofan, Sudan, and of reported disappearances of civilians, targeting of people on an ethnic basis, and extra-judicial killings," Valerie Amos, the U.N. undersecretary-general humanitarian affairs and emergency relief coordinator, said in a statement.

Since the fighting began on June 6, U.N. humanitarian agencies have asked the government of Sudan for access to the people of South Kordofan, but the requests have been denied, she said.

Though some humanitarian agencies have been given limited access to Kadugli, which is the capital of South Kordofan state, the restrictions "are seriously impeding our ability to assist people in need," she said. "We know that many of the 1.4 million residents within the affected areas will increasingly need humanitarian aid. We know that at least 73,000 people were displaced by the fighting, though we suspect that the actual number is much higher."

U.S. Ambassador Susan Rice told the Security Council on Wednesday that the displacements occurred as a result of fighting between lingering rebel remnants and Sudanese soldiers in Southern Kordofan.

"Both parties need to agree immediately to a cessation of hostilities," she said. "The violence, the human-rights abuses and the deliberate obstruction of access for humanitarian agencies must end."

The restrictions on access mean that little is known about those who have fled to mountain areas, Amos said. "We do not know whether there is any truth to the grave allegations of extra-judicial killings, mass graves and other grave violations in South Kordofan."

Amos briefed the Security Council Friday on the violence. "I am increasingly alarmed by the mounting allegations of mass graves in South Kordofan," she said in a statement.

"There are secondary sources on the existence of mass graves," Ivan Simonovic, the U.N. assistant secretary-general for human rights, told reporters Friday.

Simonovic added that eight U.N. staff members have been abducted in Southern Kordofan and a ninth was shot in the leg.

The report highlights attacks on the civilian settlements in the Nuba mountains, home to the Christian minority who fought alongside the south in its long struggle for independence.

An independent contractor detained in late June by the Sudanese Armed Forces reported having seen some 150 bodies of people of Nuban descent scattered on the grounds of a military compound in Umbattah.

And the Satellite Sentinel Project reported Wednesday that its work has revealed "visual evidence of mass graves in South Kordofan. ... The evidence found by SSP is consistent with allegations that the Sudan Armed Forces and northern militias have engaged in a campaign of killing civilians."

The project is based on the Harvard Humanitarian Initiative's analysis of satellite imagery and witness reports.

"Those responsible for the violation of international human rights and humanitarian law should be held accountable," said Security Council President and German Ambassador Peter Wittig.

The report, which the Security Council requested, recommends an independent inquiry into human-rights abuses and a possible referral to the prosecutor of the International Criminal Court.

It comes as the Republic of South Sudan, which seceded from the north on July 9, was welcomed this week as the 193rd member state of the United Nations.

Ezekiel Lol Gatkuoth, head of the mission of the government of South Sudan, danced in celebration shortly after the country's new flag took its place among the others at U.N. headquarters in New York.

But the independence celebrations came with worries, given that the Sudanese government demanded an end to peacekeeping operations in the region.

CNN's Matthew Van and Richard Roth contributed to this report.