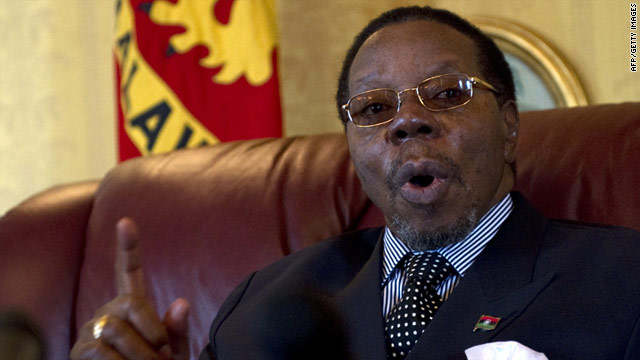 Nine people died in Mzuzu, in the northern part of Malawi, on Wednesday, Ministry of Health spokesman Henry Chimbali said. Another died in Karonga district, also in the northern region.

It was not immediately clear how the 10 died, but officials were investigating, Chimbali said. Sources at Mzuzu Central Hospital who requested anonymity said the victims had been shot.

Two other people were fatally shot in Blantyre in the southern part of the nation, police spokesman Superintendent Davie Chingwalu said.

Amnesty International called for an immediate investigation into the Mzuzu deaths, asserting that security forces were responsible.

"At least 44 other people, including six children, are being treated for gunshot wounds at Mzuzu Central Hospital," the human rights organization said in a statement.

The protests began Wednesday as people demanded immediate action from the government on Malawi's economy and government issues.

The East African nation is facing persistent fuel shortages, foreign exchange reserve shortages and frequent power blackouts, among other problems. In addition, anti-government demonstrators have accused President Bingu wa Mutharika of dragging the nation back into the dictatorship era, citing the passage of bills they say impinge on citizen rights as well as the expulsion in April of British envoy Fergus Cochrane-Dyet.

The expulsion has cost Malawi dearly, as Britain has suspended direct budget support for the nation. According to the BBC, Cochrane-Dyet was told to leave Malawi in April after he was quoted in a leaked diplomatic cable as saying Mutharika was "becoming ever more autocratic and intolerant of criticism."

Mutharika spoke Thursday as the protests continued. "As a leader, I am ready to have a roundtable discussion with you," he said in an address. "I call upon everyone to stop vandalizing people's property and beating up others. Get yourselves organized and notify us so that we can chart the way forward."

In a statement, organizations that had planned the protests also appealed for calm, noting that the demonstrations were meant for Wednesday and that continued protests Thursday were illegal.

The country's army was assisting in quelling the protests Thursday, leading to relative calm.

More than 200 people arrested in the Malawian capital of Lilongwe face charges ranging from arson to property damage.

"When the police use firearms, they must minimize injury and respect human life," Erwin van der Borght, Amnesty International's director for Africa, said in the organization's statement. "It is high time that President Mutharika's government addresses the wider human rights and political concerns that gave rise to this situation."

The United States condemned Wednesday's use of force by Malawian authorities to prevent peaceful demonstrations and a ban on private radio stations reporting on the demonstrations.

In a statement, U.S. State Department Acting Deputy Spokeswoman Heide Bronke Fulton said U.S. officials were also "disturbed by reports of violence targeting individuals based on their political or social affiliations. The government's attempt to prohibit its citizens from marching, and the Communications Regulatory Authority's ban on independent media coverage undermine democracy and the rule of law that Malawians cherish."

She urged restraint from both sides. "We call on the people and the Government of Malawi to remain committed to the principles of democracy and to express disagreements through peaceful means," she said.