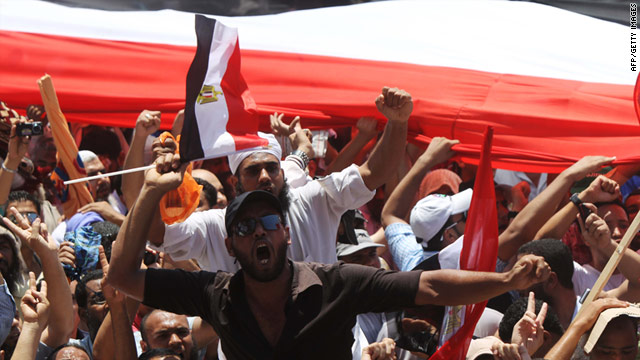 Cairo (CNN) -- Egyptian security forces moved into Cairo's Tahrir Square on Monday, dispersing the protesters gathered there and beating those who did not leave voluntarily, according to a witness with activists in the square.

"They went in and they just kind of threatened people," said Barak Barfi of the New America Foundation. He said most people left peacefully, and while police beat those who did not, they did not use tear gas or water cannon on the protesters as they have in the past. The security forces tore down tents, he said.

Army and police moved into the square and removed all protesters and tents, said Said Salem, spokesman for one of Egypt's "popular committees" -- groups formed by citizens in the wake of the revolution. Traffic was flowing through the square afterward, he said. Eyewitnesses reported that security forces beat and arrested several protesters and what sounded like gun shots could be heard.

Throngs of pro-democracy activists have been camped out on the square, which served as ground zero for demonstrations that eventually forced former President Hosni Mubarak to step down in February after three decades in power.

Protesters returned July 8, frustrated by what they see as the slow pace of change. They are demanding speedy trials of police officers accused of killing protesters during the demonstrations that topped Mubarak; the end of military tribunals; the abolition of the emergency law; and economic reforms such as the establishment of a minimum wage.

Muslims around the world ushered in Ramadan on Monday, and the number of protesters in the square was smaller than in recent days, Barfi said. On Sunday, 26 political parties and protest movements issued a statement saying they would suspend their demonstrations "temporarily."