U.S. warns Libyan rebels to get their act together 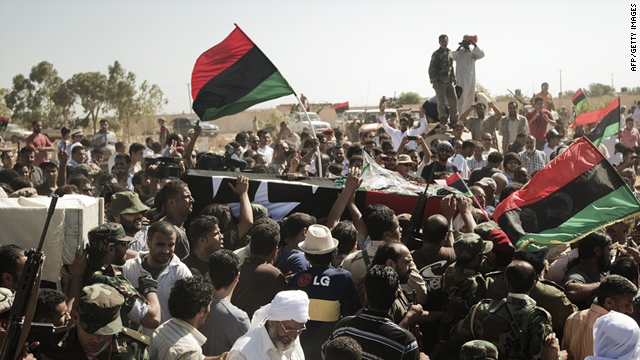 Washington (CNN) -- Even as it prepares to hand over the Libyan embassy in Washington to the rebel government, the State Department is warning the Transitional National Council to get its act together.

An administration official told CNN the United States has warned the TNC that this is a "do-or-die moment" for the organization to carry out a credible and thorough investigation of the killing of its military commander, Abdel Fatah Younis. Last week's mysterious assassination has raised concerns that it might have been carried out by feuding groups within the rebels themselves.

"We do welcome the Transitional National Council's move to set up an impartial committee that will investigate the incident and we look forward to hearing the results," deputy spokesman Mark Toner told reporters Monday. "It's important that, given the fluidness of the situation on the ground, that the Transitional National Council work to ensure that it takes the right kinds of actions, such as an investigation into the death, and sends a clear and transparent message that they speak on behalf of the Libyan opposition and the Libyan people and that they are diligently carrying out their mandate."

The TNC has been rocked by internal divisions, with rival rebel groups battling each other. The divisions create a dilemma for the Obama administration, which recognized the rebel movement based in Benghazi as Libya's rightful government on July 15 at an international meeting on Libya in Istanbul. The move, done in coordination with the international community, paves the way for the United States to reopen the embassy, accredit diplomats and unfreeze billions of dollars in frozen assets.

The internal strife within the rebel movement comes as the State Department prepares to hand over the Libyan embassy to the TNC as the recognized government of Libya, according to U.S. officials.

The officials say the move would allow the TNC to re-open the embassy, accredit diplomats and regain control of the embassy's frozen bank account, worth about $13 million.

It follows a formal request from the TNC to re-open the embassy under its control and accredit Ali Aujali, the former Libyan ambassador to the United States, as its charge d'affaires.

In March, the State Department ordered the Libyan embassy in Washington closed and kicked diplomats loyal to Libyan leader Moammar Gadhafi out of the country. Aujali had resigned his post as the regime's ambassador to the United States in February and has since represented the opposition in Washington.

"We are consulting with the National Transitional Council on a broad range of issues, and that includes diplomatic accreditation and representation," Toner said.

Despite the divisions within the TNC, the State Department publicly expressed confidence in the rebels.

"We believe that this is the legitimate representatives of the Libyan people during this transition period," Toner said. "This is an extremely challenging period for Libya and they are dealing with these challenges as they come. But we have confidence that they can weather this."

But privately, U.S. officials acknowledge there is some concern about the apparent disarray within the rebel movement, although officials say it is not surprising.

"This is a tribal society," one official said. "We knew from the start this could be messy and there was always the concern about not moving too fast. We had no illusions about the TNC, but they have done a pretty good job and look better to us than Gadhafi at this point."

NATO has been bombing Libya for more than four months under a U.N. mandate to protect civilians from troops loyal to Gadhafi, who is battling a rebellion that has claimed control of the eastern half of the country. The U.S. Embassy in Tripoli was shuttered and American personnel evacuated by sea and air in late February, after the current revolt against Gadhafi erupted.

Also Sunday, state TV aired video of Saif al-Islam Gadhafi, Gadhafi's son, speaking to what was described as displaced families. He has not been seen speaking in public for weeks.