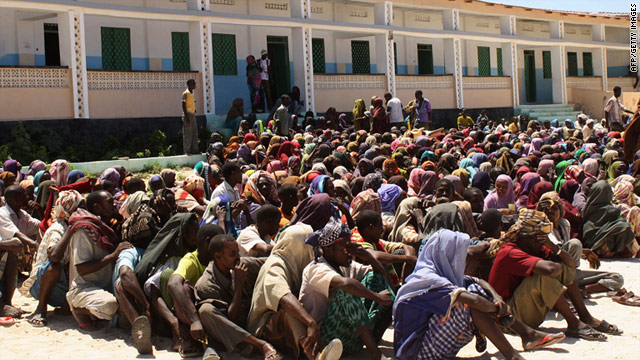 Internally displaced Somali men and women wait for food-aid to be distributed at a centre in Mogadishu, on July 30, 2011
STORY HIGHLIGHTS
RELATED TOPICS

United Nations (CNN) -- Three more regions of Somalia have now been struck by famine, including the capital, Mogadishu, the United Nations announced Wednesday.

Mogadishu, the Afgooye corridor and the Shabelle regions west of the capital are the latest that "have slipped into famine," U.N. spokesman Martin Nesirky told reporters Wednesday afternoon. The declaration "reflects the massive influx of people into the city in the last two months," he said.

"This latest information also confirms the seriousness of the problem facing internally displaced people in Mogadishu, who require our immediate and concerted response," he said.

The United Nations issued a famine declaration for two districts of southern Somalia in June. The entire Horn of Africa region is facing an extensive drought that has left more than 12 million in need of assistance.

Relief efforts in Somalia have been hindered by the ongoing battle between Islamist rebels and Somalia's transitional government, which holds little sway beyond Mogadishu. The rate of malnutrition in Somalia's rebel-held south is the highest in the world, approaching half the population, U.N. officials report.

About 100,000 people displaced by the fighting have flocked to Mogadishu in recent weeks, according to the U.N. Office for the Coordination of Humanitarian Affairs. More than 3.7 million Somalis are in need of aid, including about 1.3 million children "in urgent need of life-saving interventions." Of those, about 640,000 are acutely malnourished, the office reports.

The rebel movement Al-Shabaab launched a Ramadan offensive Monday amid the spreading famine with heavy fighting reported in the northeastern part of the city, according to African Union officials.

Two soldiers from the AU peacekeeping mission in Mogadishu were killed during a gunfight with the rebels, during which troops killed two apparent suicide bombers dressed in Somali uniforms before they were able to detonate bombs strapped to their bodies.

"In the midst of a famine seizing Somalia, the extremists are choosing to focus on killing, not saving life," said Lt. Col. Paddy Ankunda, a spokesman for the peacekeeping mission. "The extremists are using desperate measures to achieve their ends through their willingness to use brutal violence during the holy month of Ramadan."

Amid the crisis, a senior U.N. official urged Somali expatriates to support peace efforts and contribute to relief efforts Wednesday.

"This is a time of great crisis, but also of rare opportunity. It is a time for everyone to pull together to help those suffering and to work towards a better future for all," Augustine Mahiga, the U.N. special representative for Somalia, said in a letter addressed to Somalis abroad.