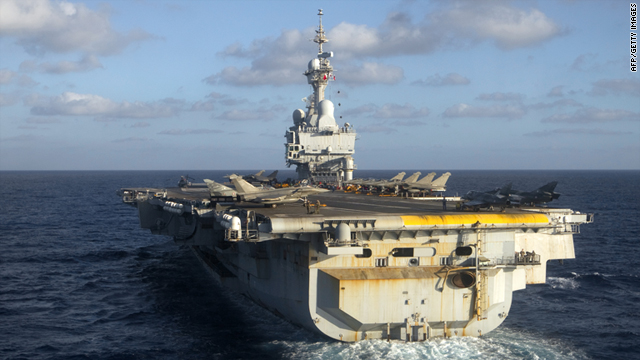 (CNN) -- A Libyan government spokesman said Thursday that forces loyal to embattled leader Moammar Gadhafi did not fire a missile at NATO warships, as he had told reporters a day earlier.

The Italian frigate Bersagliere reported spotting a suspected missile about 19 kilometers (12 miles) off the port city of Zlitan on Wednesday. The weapon had fallen harmlessly into the sea, according to Italy's defense ministry and NATO.

Government spokesman Moussa Ibrahim told reporters that government forces were responsible for the attack, but said Thursday that his comment was "a misunderstanding." Ibrahim told CNN that military officials later told him they hadn't launched a missile at the NATO fleet currently off Libya.

"We did not fire any missiles into the sea against the ship," Ibrahim told CNN.

Gadhafi's forces have been battling a nearly six-month-long revolt that has split Libya roughly in half. NATO planes and warships joined the fight in March, pounding government troops under a U.N. mandate to protect civilians from reprisals by Gadhafi loyalists.

Though most of the allied campaign has been conducted from the air, NATO warships reported fighting at least two brief sea engagements with pro-Gadhafi forces off the port city of Misrata in May.