Witness: 7 dead in fight over food in Somalia 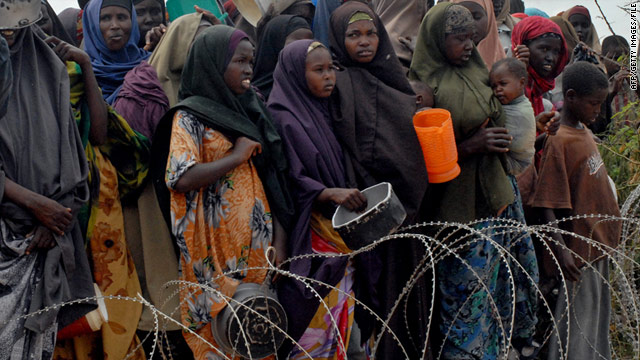 Internally-displaced Somalis wait for food at the Badbaado refugee camp in the Somali capital of Mogadishu on July 26, 2011
STORY HIGHLIGHTS
RELATED TOPICS

Mahamed Ali, a refugee at the camp, said several other people were wounded in the incident, which was sparked when food supplies were taken.

David Orr, a spokesman for the World Food Programme in east, central and southern Africa, said the organization was working to clarify what happened.

"This incident highlights the challenges that humanitarian agencies face in trying to deliver assistance in this difficult environment," he told CNN.

The incident came a day after the International Committee of the Red Cross said it was ratcheting up emergency operations to help an additional 1.1 million people suffering from famine under drought and conflict.

The agency is asking donors for $87 million more to address the crisis.

"The move comes in response to a situation that is becoming ever more desperate," said Jakob Kellenberger, the president of the agency. "Hundreds of thousands of Somalis face life-threatening food and water shortages."

The African Union, however, postponed its donor conference by two weeks, without giving any reasons. The meeting planned for August 9 now will take place August 25.

The United Nations estimates that 29,000 children have perished in the past month. Valerie Amos, the under-secretary for general and emergency relief, told CNN Thursday that 600,000 may die.

She urged support for the aid organizations that are able to operate in southern Somalia, in areas controlled by rebel Al-Shabaab militants, who have banned international agencies.

Al-Shabaab launched a Ramadan offensive Monday amid the spreading famine, with heavy fighting reported in northeastern Mogadishu, according to African Union officials.

The United Nations declared famine in three more regions of Somalia on Wednesday -- the war-ravaged capital, Mogadishu, as well as the Ifgooye corridor and the Shabelle regions west of Mogadishu.

The human catastrophe was triggered by the worst drought in more than a half-century and compounded by decades of conflict, high inflation and increasing global food and fuel prices.

The United Nations issued a famine declaration for two districts of southern Somalia in June.

In all, about 12 million people in the Horn of Africa region need assistance. Somalia is the worst hit.