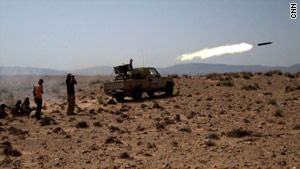 A rocket was fired Saturday toward Gadhafi forces outside Bir Al-Ghanam.

Rebel commanders said 1,500 opposition members joined in the battle, which lasted five hours. Rockets and gunfire were exchanged from both sides, and rebels took on Gadhafi fighters from three fronts.

At least eight rebels were killed and dozens more wounded, according to medical sources. Casualties inflicted on Gadhafi forces were not immediately known.

Rebel fighters said Gadhafi's forces had retreated from Bir Al-Ghanam and claimed victory over the town.

The offensive began at dawn as hundreds of rebels swept in from the west off the Nafusa mountains and into the plains below. The fighters in Saturday's attack are part of what some have dubbed a Mad Max army -- a fleet of pickup trucks modified to take heavy weapons speeding across the desert. Most of the men were civilians before the fighting broke out.

Bir Al-Ghanam is about 85 kilometers (53 miles) from the capital city of Tripoli. Capturing the town is significant because not much else stands in the way between Bir Al-Ghanam and the Libyan coastline -- where Tripoli is situated.

"It was very, very fierce," one rebel fighter told CNN after the offensive was over. "But there is no time to rest. The next step, Tripoli."

For months, rebel fighters -- who have controlled the eastern city of Benghazi and other areas -- have been trying to move closer toward Tripoli, in the west. They are seeking the ouster of Gadhafi, who has ruled Libya for 42 years.