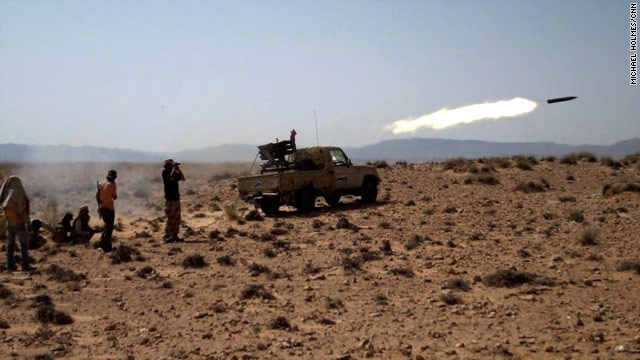 Libyan rebel forces gained ground at Bir al-Ghanam on Saturday, but government forces claimed to have won it back.
STORY HIGHLIGHTS

Zintan, Libya (CNN) -- The Libyan government said Sunday it had retaken the key town of Bir al-Ghanam after losing it briefly to rebel forces, but a rebel commander said his forces were holding onto the town.

Bir al-Ghanam is about 85 kilometers (53 miles) southwest of the Libyan capital Tripoli. Its capture is significant because little else stands between Bir Al-Ghanam and the Libyan coastline where Tripoli is situated.

After rebels gained control of the town Saturday, one rebel fighter told CNN the "next step" was Tripoli.

Libyan Prime Minister Baghdadi Al-Mahmoudi told reporters in Tripoli on Sunday that rebel forces had the town for only a few hours. Bir al-Ghanam "is now back in the hands of the honorable brave tribes, with its surface back in normal life and under the control of the legitimate government of Libya," Al-Mahmoudi said.

But Nasr Abu al Qassem, who was in Zintan, about 70 km (43 miles) southwest of Bir al-Ghanam, said rebels remained at the front line in Bir Al-Ghanam and were being reinforced. The situation in the town was stable, he said.

Rebels on the move in Libya

Some grad rockets were fired at the town from a distance Sunday morning, but no rebels were injured, he said.

Rebel commanders said 1,500 opposition members joined in Saturday's battle, which lasted five hours. Rockets and gunfire were exchanged from both sides, and rebels took on Gadhafi fighters from three fronts.

At least eight rebels were killed and dozens more were wounded, according to medical sources. Casualties inflicted on Gadhafi forces were not immediately known.

The fighters in Saturday's attack were part of what some have dubbed a Mad Max army -- a fleet of pickup trucks modified to take heavy weapons speeding across the desert. Most of the men were civilians before the fighting broke out.

For months, rebel fighters -- who have controlled the eastern city of Benghazi and other areas -- have been trying to move closer to the capital. They are seeking the ouster of Gadhafi, who has ruled Libya for 42 years.

CNN's Michael Holmes and Kareem Khadder contributed to this report.