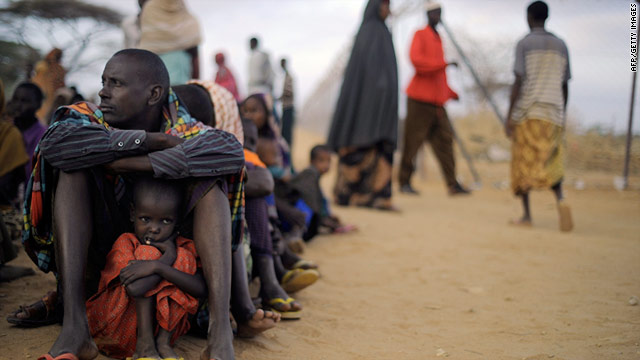 A Somali father and daughter sit at the head of a queue at a registration center at the Dagahaley refugee site.
STORY HIGHLIGHTS

Monday night on CNN, Anderson Cooper and Dr. Sanjay Gupta report live from Somalia with more on the country's disturbing hunger situation. "AC360º" is now at 8 and 10 p.m. ET weeknights on CNN.

(CNN) -- For the first time in five years, a relief agency dedicated to refugees airlifted emergency aid into the Somali capital of Mogadishu on Monday, according to a spokesman.

The aid flight comes just days after Islamic insurgents fled Mogadishu after a heated battle with government and African Union forces. But the trip has nothing to do with improved security, Needham said.

"We took the unprecedented decision to take the airlift for speed due to the famine," he said.

Needham said the group has warehouses across Somalia and would "normally re-stock them over land." But the agency shifted logistics in reaction to starving people flocking to Mogadishu.

"The supplies will be distributed almost immediately," Needham said.

At least two more supply flights are in the pipeline. The next, which is due to land Thursday, will be similar to Monday's delivery.

The third flight will include "high-energy biscuits."

Also Monday, the White House announced that U.S. President Barack Obama approved an additional $105 million for relief efforts in the Horn of Africa.

About 100,000 Somalis have flocked to Mogadishu in search of food and potable water, which have disappeared in a devastating famine and drought, according to the U.N. They join more than 370,000 internal refugees already in the capital in war-torn southern Somalia, many of whom also face hunger.

The UNHCR is calling for more private and government donations for emergency operations in the Horn of Africa, warning that a lack of funds threatens future aid.

The U.N. declared famine in five areas of southern Somalia in June, including Mogadishu. In all, about 12 million people in the Horn of Africa region need assistance. Somalia is the worst hit.