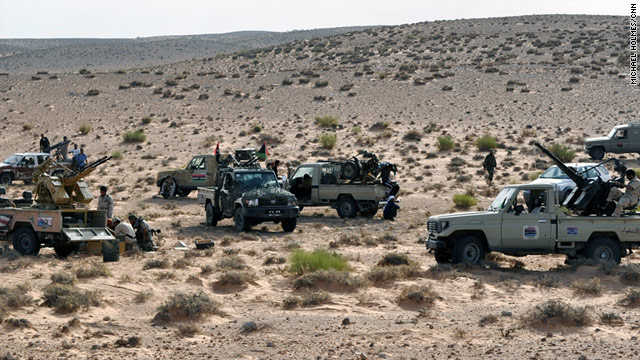 Libyan rebels move on the town of Bir al-Ghanam on Saturday. Rebels say they have maintained control of the city.
STORY HIGHLIGHTS

"They were dismissed because of some are directly responsible for how Gen. Younis was arrested," Abdulmolah said. "There were shortcomings and mishandling of the events that led to his assassination."

Younis and two other rebels were killed after the TNC sought to question him about allegations that he or those close to him had ongoing ties to Libyan ruler Moammar Gadhafi, Younis' supporters have said.

"There are two investigations going on now in relation to his assassination," Abdulmolah said. "There is the criminal investigation, and there is another investigation looking for the administrative mistakes that led to Younis' death."

At least four people are directly responsible administratively for the events leading to the Younis assassination, Abdulmolah said. But the criminal investigation is still ongoing, and no arrests have been officially been made.

Despite their dismissal, Abdulmolah said "some of the people who served on the board can definitely be included in the new Cabinet."

The rebel government's chairman commissioned Mahmoud Jibril, the former head of the executive board, to submit new names to be considered for a new board soon, Abdulmolah said, but no exact deadline was mentioned.

NATO has used air power to enforce a U.N. resolution protecting civilians from the Gadhafi regime, and world powers have announced their support for Libya's rebel umbrella group.

But concerns have been raised that the mysterious assassination might have been carried out by feuding rebel groups.

According to Gadhafi spokesman Musa Ibrahim, Younis' killing represented "more proof that the transitional council of the traitors is not able to lead any sort of government or have any control of eastern cities of Libya."

In July, rebel military council member Mohammad Ethish released a statement that seemed to imply that Gadhafi loyalists had something to do with the death.

"This incident will increase the will and courage of the rebels, and it will even get us close together to reach the home of the tyrant," Ethish said. "We promise our brothers in the East that we will do the impossible to avenge the death of Abdul Fattah Younis, and we promise that we will increase our blows and empower our will. Until we capture the tyrant Moammar Gadhafi."

A one-time general in Gadhafi's army, Younis told CNN in February that he switched sides after Gadhafi told him he planned to bomb Benghazi -- a move Younis said would have killed thousands.

Rebel forces also reported Tuesday that they had advanced more than 9 miles (15 kilometers) north from B'ir al Ghanam toward the key coastal city of Az Zawiyah, which is about 27 miles (43 kilometers) west of Tripoli.