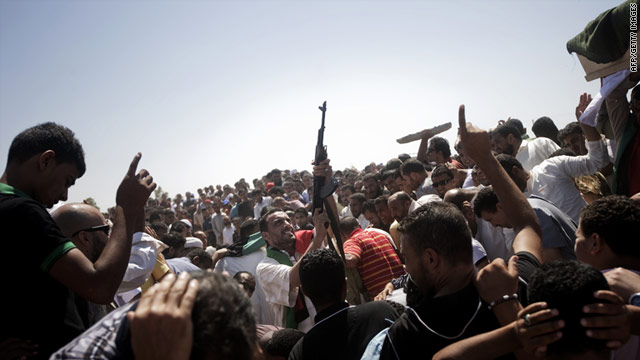 A Libyan mourner fires shots in the air at a cemetery on August 12 during the funeral of five rebels killed in the battle for the control of the oil-rich town of Brega.
STORY HIGHLIGHTS

Tripoli, Libya (CNN) -- Rebels said Saturday that they were gaining traction in a series of offensives in several parts of Libya controlled by ruler Moammar Gadhafi -- claims that the Libyan government swiftly disputed.

Heavy gunfire was heard in al-Zawiya, located about 33 miles west of Tripoli, where rebels had arrived. Rebels entered the city center and managed to cut off the road to Tripoli, they said.

Talha Jwaili, a rebel fighter, told CNN that rebels control al-Zawiya. Ten rebels died in the fighting, four from Zintan and six from al-Zawiya, he said. More than 20 people were reported injured.

A spokesman in the media office of the Military Council of the Western Mountain Region said that rebels control about 85% of the city and that clashes there are ongoing.

CNN could not independently confirm Saturday who was in control of al-Zawiya, nor other details of the rebels' accounts.

A government spokesman downplayed the fighting, telling reporters in Tripoli that the town is "absolutely under our control."

Al-Zawiya is strategically important because the coastal road through the city is the main supply line from the Tunisian border to areas held by Gadhafi.

Government spokesman Musa Ibrahim said fewer than 100 rebels moved in on al-Zawiya from the southern side of the city, but were stopped. Another group of fewer than 50 rebels was waiting inside the city, but "took action too early," he said, adding that the group is still on the run.

While forces loyal to the Libyan leader tried to defend the capital from the west, rebels announced that they had cut off an important military supply route to the south.

Sixty miles to Tripoli's south, rebels said they captured the town of Garyan and pushed the Gadhafi forces to the south, cutting them off from the road to Tripoli. The soldiers left behind heavy artillery and ammunition, rebel field commander Adel al-Zintani told CNN.

"We captured many anti-aircraft artillery vehicles, two full fuel tankers and 106 anti-tank piercing artillery and shells," he said. Seven people were injured in the clashes, he said.

"The rebels have 95% control of Garyan and have surrounded a Gadhafi brigade inside a military camp inside Garyan," said the spokesman in the media office of the Military Council of the Western Mountain Region.

Finally, in the opposition-held port of Misrata, missile attacks by Gadhafi forces ended after rebels captured the nearby town of Tawargha, National Transitional Council spokesman Guma El-Gamaty told CNN. That city was being used by Gadhafi forces to launch missiles indiscriminately into Misrata, he said.

Ibrahim also downplayed the rebel claims in other towns.

This week, the government accused NATO of killing 85 civilians, including 33 children, in airstrikes Monday near the embattled city of Zlitan.

NATO has said there is no evidence that the strikes killed civilians, though journalists, including CNN reporters, taken by Gadhafi's government to the site of the strikes, reported seeing bodies of women and children.

It was impossible for CNN to confirm the extent of the casualties and if they were all civilian.

Kaim on Friday criticized the United Nations for what he claimed was an organizational silence over claims that NATO has violated the mandate of the Security Council by killing civilians and conducting a naval blockade.

Ibrahim renewed the government's accusations Saturday, saying NATO is aiding the rebels, whom he described as "armed gangs."

The comments follow a statement a day earlier by a spokesperson for Ban Ki-moon, who said the U.N. secretary-general "is deeply concerned by reports of the unacceptably large number of civilian casualties as a result of the conflict in Libya."

Ban urged "all Libyan parties" to engage with his special envoy, Abdel-Elah Al-Khatib, "and respond concretely and positively to the ideas presented to them, in order to end the bloodshed in the country," the spokesperson said.

Ibrahim repeated Saturday his own calls for an end to the conflict, telling NATO: "Stop this aggression and let's talk peace."