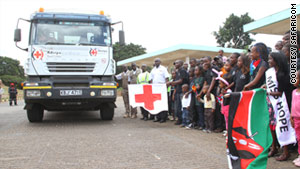 Kenyans flag off a shipment of citizen-funded food headed to the north, which is facing a drought.

(CNN) -- A campaign to raise funds for starving Kenyans has galvanized the nation as families battle a devastating drought in the nation's northern region.

The effort, dubbed "Kenyans for Kenya," has raised about $7.6 million so far. Hundreds of thousands answered the call to help fellow citizens, with some donating their entire monthly salaries.

"I was watching television one night when I saw a rail thin baby suckling on her mother long after she was dead," said Hashim Elmoge, a police officer in the capital, Nairobi.

"It was just sad ... As a Kenyan, I could not just sit there and not do anything especially after seeing those images of emaciated women and children."

A few days later, he handed over his entire July salary to the campaign, which will administer the funds through the Kenyan Red Cross.

"Those children are like our children. With the progress we have in the world, children should not go hungry," he said.

Elmoge declined to say how much he makes. Most Kenyans are paid monthly, with a police official in his position earning about $200 a month.

Mogadishu: No money to bury child
We are all Kenyans
--Jane Waithera, who donated $3 to the effort
RELATED TOPICS

The 36-year-old bachelor said his friends have rallied to his rescue by inviting him to their homes to eat during the month of Ramadan.

"In addition to feeding me, others have given me food, money -- anything they can to donate to 'Kenyans for Kenya,'" he said.

The campaign has sparked a show of unity in a nation that was on the brink of a civil war two years ago following a disputed presidential election that split the country along tribal lines.

"No one is thinking about tribes in this campaign," said Jane Waithera, who donated $3 to the effort. "We are all Kenyans. When you look at those suffering as your brothers, sisters or children, there's no way you can look the other way."

The campaign launched last month amid criticism that the government is not doing enough to help starving citizens in the hardest-hit regions.

Kenya is among Horn of Africa nations facing the worst drought in decades. The lack of rain has especially hit neighboring Somalia, where some regions are battling a famine that has sent thousands fleeing on foot to refugee camps in Kenya and Ethiopia.

Droughts are common in Turkana, the hardest-hit region in the nation. Residents in northern Kenya rely on animals for survival, but the lack of rain has left dead animals strewn all over the landscape.

Critics applauded the effort, but said the government should do more to implement viable solutions.

"There's also a lack of long-term planning from the government," said James Kamau, a university student. "Droughts have been happening in that part of the country for years. Why is there no long-term solution yet?"

In a statement last week, government spokesman Alfred Mutua said Kenya will spend 30 billion shillings ( $323 million ) in anti-drought measures. He said logistical factors, including lack of enough trucks to ship food to the drought-stricken areas, have slowed the response.

Organizers have taken to the airwaves and social media to urge Kenyans to reach out.

"Kenya can be defined by the compassion of its people," said Bob Collymore, CEO of Nairobi-based Safaricom. "What we have got so far has defied all our expectations."

The mobile phone services provider launched the campaign, and mobilized citizens and other corporate companies to donate funds and services. Most of the citizen donations came through M-Pesa, a popular mobile-phone based money transfer service for Safaricom.

"This is a purely Kenyan effort ... finding African solutions to African problems," Collymore said. "All the aid was coming in for Somalia, but there were also a lot of Kenyans going through a drought."

The first food shipments have already gone to the region, Collymore said.

While food remains a priority, some funds will go toward building boreholes in the region to provide water all year, he said.

"We don't see ourselves as the right people to fix the problem in the long-term," Collymore said. "However, we want to make sure our efforts leave behind a sustainable legacy ... and set the tone in the nation for years to come."

The campaign will culminate at month's end with a telethon.