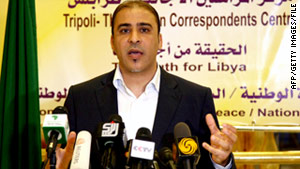 Moussa Ibrahim was breaking his fast when he heard reports of his younger brother's death.
STORY HIGHLIGHTS
RELATED TOPICS

Tripoli, Libya (CNN) -- A brother of Moussa Ibrahim, the spokesman for the government in Tripoli, was killed Thursday night by NATO aircraft, a government official here said.

Hasan Ali Ibrahim, the younger sibling, was working as a civilian volunteer for the Gadhafi government, the official said. The 25-year-old university student had departed Tripoli with a group of people to check on friends in Zawiya after hearing reports of fighting there; he and the others were struck by bullets fired from an Apache helicopter while on foot in Zawiya's central square, the official said.

Moussa Ibrahim received the news, as he was breaking his Ramadan fast with members of his family at a Tripoli hotel housing journalists. The elder Ibrahim was in the dining hall when he received a call, jumped from his chair, knocking it down and ran from the room yelling.

Afterward, a government official approached a reporter for CNN and asked her to report the news, and to explain why Moussa Ibrahim had reacted the way he did.

NATO did not immediately respond to a request for comment.

Earlier in the day, Prime Minister al-Baghdadi al-Mahmoudi renewed the Gadhafi government's call for a peaceful resolution to the conflict.

"It is high time for an immediate cease-fire," he said, adding that his government was ready for a cease-fire "as always."

Al-Mahmoudi said that the military is "powerful enough to finish this battle" to its advantage, but said that the cost would be too high. He called again for dialogue to resolve the crisis peacefully.

The prime minister added that, despite "hardships," the Gadhafi government was "able to provide the necessary services" for the people.

As for Moammar Gadhafi himself, the prime minister repeated that neither the Libyan leader nor his relatives would leave the country.

Al-Mahmoudi's comments came after the weekly cabinet meeting and as his government's troops were battling rebel forces on a number of fronts, including in the west, where fighting has raged for days over the strategic city of Zawiya, about a half-hour's drive west of the capital.

His remarks coincided with continued air strikes by NATO forces. As the ministers were meeting Thursday afternoon, four explosions rocked the capital, including the building where the meeting was being held. Government officials said the explosions were caused by NATO air strikes on Tajoura on the eastern outskirts of Tripoli. The strikes resumed late Thursday and continued into Friday.

Al-Mahmoudi said the call for a peaceful resolution came from "a position of power, not weakness... we are able to continue the fight, but from the very beginning we chose peace."

He said talks with all parties involved were under way. "These few days we are communicating with everyone in order to reach a peaceful solution soon," the premier said.

But Al-Mahmoudi declined to comment on reports of recent meetings with rebel representatives. "You will hear good news in the next few days, if you are for peace," he said, without elaboration.

Al-Mahmoudi's comments come after humanitarian groups have raised concerns that the fighting in Zawiya and the closure of the coastal road between Tripoli and Tunisia, a lifeline for the regime, could worsen already serious shortages of fuel, food and medical supplies.

News reports on Thursday quoted rebels as saying they had seized control of the oil refinery in Zawiya. The prime minister denied the reports, saying the refinery was "under our full control."

Al-Mahmoudi also denied that government forces launched a short-range missile on Sunday. A U.S. defense official said this week that forces loyal to Gadhafi fired the Scud missile on Sunday at a rebel stronghold, but that the missile failed to reach its target.

But Al-Mahmoudi said the only rockets that fall on Libya are from NATO.