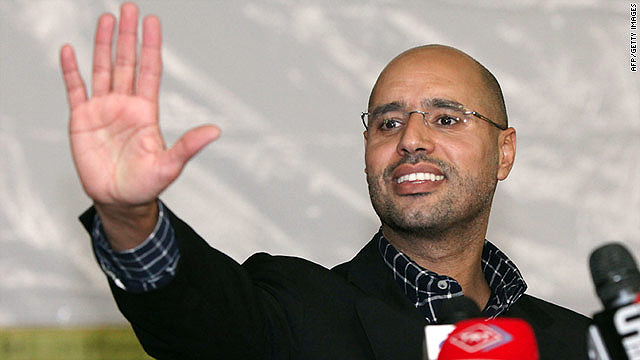 Saif al-Islam Gadhafi, one of three sons of Moammar Gadhafi reportedly captured by Libyan rebels, waves to a crowd in March.
STORY HIGHLIGHTS

"As for the other four sons, we think they are either hiding or they have run away," said Guma El-Gamaty, the Britain-based coordinator for Libya's Transitional National Council.

The latest arrest was that of Mohammad Gadhafi, whom the rebels claimed was being confined to his house.

Gadhafi son: 'They're inside my house!'

A barrage of gunfire was then heard and the phone cut off.

Later, the head of the Transitional National Council told the station that Mohammed Gadhafi was not harmed.

Earlier, rebel leaders said they captured Saif al-Islam Gadhafi, a top official in his father's regime. Another of Gadhafi's sons, Saadi Gadhafi, was also in custody, the rebels announced.

The International Criminal Court says it plans to negotiate the transfer of Saif Gadhafi who -- along with his father -- is wanted for crimes against humanity in connection with their attempts to put down the emerging revolt against Gadhafi's four-decade rule in February.

The court, based in The Hague, Netherlands, issued a similar warrant for Abdullah al-Sanussi, the elder Gadhafi's brother-in-law and Libya's intelligence chief.

The third son detained is Saadi Gadhafi, a businessman and onetime professional soccer player. He helped set up an April CNN interview with a woman who claimed she'd been raped by government troops. He later told CNN that those behind the attack should be prosecuted.

Ali Suleiman Aujali, the Libyan Transitional National Council ambassador to the United States, told CNN early Monday he believes the Libyan people should decide whether to hand over the sons to the ICC.

"I believe the choice for the Libyan people they have the rights, you know, what they want to do with them," he said.

Aujali said the decision will be made at a later date. "It's very difficult to say at the present time," he said.

There was no immediate reaction from Libyan government officials to the reports of the three sons' arrests. The whereabouts of Moammar Gadhafi was also unknown.