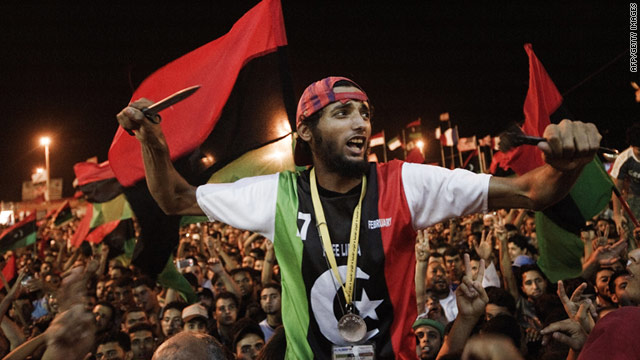 (CNN) -- With Libyan rebels on the brink of toppling Moammar Gadhafi's 42-year rule, leaders from around the world weighed in as the battle with regime forces intensified in the capital.

Here are a few of the reactions:

Ma Zhaoxu, Foreign Ministry spokesman: "We've noticed the development in Libya. China respects the choice of Libya people. China hopes the situation in Libya gets stabilized as soon as possible and people can live a normal life there. China is willing to cooperate with the international society to play a positive role in the future reconstruction of Libya."

Catherine Ashton, high representative of the EU for foreign affairs: "We are witnessing the last moments of the Gadhafi regime. I call on Gadhafi to step down without further delay and avoid further bloodshed. I call on the National Transitional Council and opposition forces to ensure the protection of civilians, to fully respect international human rights and humanitarian law and to act with responsibility in the interests of maintaining peace and stability throughout the country."

Jose Manuel Barroso and Herman Van Rompuy, European Commission and European Union presidents, respectively: "The quest for freedom by the people of Libya is coming to a historic moment. The relentless efforts of the forces of the new Libya, supported militarily by NATO and several EU member states, and countries from the region are bringing the Gadhafi regime to its end. We urge Colonel Gadhafi to accept the will of the people, step down immediately, and avoid further bloodshed and sufferance."

Nicolas Sarkozy, president: "Whereas there is no longer any doubt (that Gadhafi will have to go), the president of the republic urges Colonel Gadhafi to avoid inflicting new futile sufferings on his people in abandoning what is left of his power and in immediately calling on his forces, who are still loyal to him, to a cease-fire, to drop their weapons, to go back to their barracks and to put at its disposal legitimate Libyan authorities."

Franco Frattini, foreign minister: "Time is up. There are no alternatives to his (Gadhafi's) surrender. If Gadhafi keeps calling for a civil war, he will be considered the only one responsible for the bloodbath," Frattini said in an interview with Italian news channel Sky Tg24.

Anders Fogh Rasmussen, secretary-general: "The Libyan people have suffered tremendously under Gadhafi's rule for over four decades. Now they have a chance for a new beginning. Now is the time for all threats against civilians to stop, as the United Nations Security Council demanded. Now is the time to create a new Libya -- a state based on freedom, not fear; democracy, not dictatorship; the will of the many, not the whims of a few.

Russian Foreign Ministry: "The latest dramatic development of the Libyan conflict apparently shows that the power in this country will be handed over to the rebel forces very soon. We hope that this will put an end to the protracted intra-Libyan bloodshed, which brought so many woes and so much suffering to this country's population and caused serious damage to the national economy," the ministry said in a statement..

Clayson Monyela, spokesman, Department of International Relations: "With the imminent fall of the government of Colonel Gadhafi, we wish to urge the interim authority in Tripoli to immediately institute an all-inclusive inter-Libyan political dialogue aimed at building a truly representative and people-centred dispensation."

The spokesman refuted "rumors and claims that it has sent planes to Libya" to fly Gadhafi and his family out, saying "we have steadfastly maintained that the future of Libya should be decided by the Libyans themselves."

Ahmet Davutoglu, foreign minister: "Today is a historical day for Libya. ... Leaders of other countries should also be aware that they'll stay in power as long as they respond to demands of the people."

David Cameron, prime minister: "It is clear from the scenes we are witnessing in Tripoli that the end is near for Gadhafi. He has committed appalling crimes against the people of Libya and he must go now to avoid any further suffering for his own people."

"At the U.N., we will ... be taking early action in the Security Council to give the new Libyan authorities the legal, diplomatic, political and financial support they need," Cameron said. "We will soon be able to release the frozen assets that belong to the Libyan people."

Nick Clegg, deputy prime minister: "The UK will stay the course in Libya -- protecting the Libyan people and putting them in charge of their own fate ... It is now clear that the Libyan people will only be safe once Gadhafi has left power. Recent events suggest that day is closer than ever.

Ed Miliband, leader of the Labour Party: "The situation in Libya remains fraught and fragile, but what is clear is that the regime of Colonel Gadhafi is crumbling. This is to be welcomed by all those who believe dictatorship, brutality and threats against civilians should not be allowed to stand."

Barack Obama, president: "Tonight, the momentum against the Gadhafi regime has reached a tipping point. Tripoli is slipping from the grasp of a tyrant. The Gadhafi regime is showing signs of collapsing. The people of Libya are showing that the universal pursuit of dignity and freedom is far stronger than the iron fist of a dictator."

Hugo Chavez, president: "Today we are seeing images of how the democratic European governments are practically demolishing Tripoli with their bombs and the supposedly democratic government of the United States, because they feel like it. Today they dropped I don't know how many bombs and they are dropping them indiscriminately and openly."