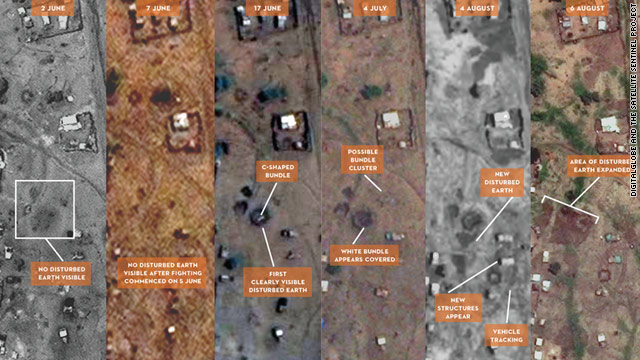 (CNN) -- A U.S. satellite project said Wednesday it has found evidence of additional mass graves in South Kordofan, a day after the Sudanese president called for a unilateral cease-fire in the state.

The Satellite Sentinel Project said it has evidence of a total of eight mass graves in the area since June, including two additional ones recently in and around Kadugli.

Kadugli is the capital of the border state.

The project cited witness accounts and images of what it says are body bags.

"This report presents more visual evidence and new information by eyewitnesses ... of the collection and burial of human remains wrapped in tarps and/or body bags by the Sudanese Red Crescent Society," it said in a statement.

Sudanese President Omar al-Bashir rejected the findings as propaganda from the west.

The Satellite Sentinel Project, which is partially funded by U.S. actor George Clooney, is based on the Harvard Humanitarian Initiative's analysis of satellite imagery and witness reports.

In the past, the government has said rebels are to blame for the violence in the region, and has been engaged in a fierce campaign to battle what it says are militia in the area.

Al-Bashir on Tuesday called for a two-week, unilateral cease-fire in the state, saying the government would assess the situation after that period.

The report follows allegations by human rights groups that Sudanese forces have conducted widespread killings in the region this summer.

The project has said its evidence is consistent with allegations that Sudan forces and militias "have engaged in a campaign of killing civilians."

Nuba fighters helped South Sudan during the civil war with Sudan, which raged for decades and left millions dead.

South Sudan became an independent nation in July. South Kordofan remains a territory of the Sudanese government in the north, but borders South Sudan.

In July, a United Nations report detailed new allegations of violence, including mass graves, in the volatile border state.