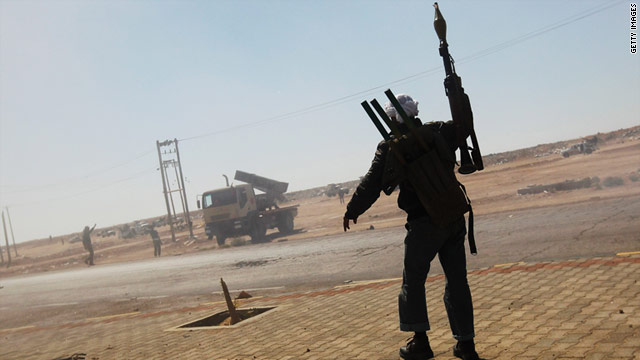 A rebel fighter celebrates in April after firing a rocket. A U.S. general says he's worried about shoulder-fired missiles in Libya.
STORY HIGHLIGHTS

Washington (CNN) -- NATO is trying to learn specifics about how many surface-to-air missiles and launchers may still be operational inside Libya and who controls them, a NATO official told CNN Thursday.

Several months ago, the U.S. military estimated Libya had an arsenal of 20,000 such missiles, known as SAMs, but it is not clear how many may have been destroyed during the conflict and who has control of those remaining.

During an April 7 hearing before the Senate Armed Services Committee, Gen. Carter Ham, chief of the U.S. Africa Command, said, "I'm very concerned about the proliferation of weapons, notably shoulder-fired surface-to-air missiles, which we assess there were perhaps as many as 20,000 in Libya as the operation began. Many of those we know are now not accounted for. And that's going to be a concern for some period of time."

But the State Department tried to tamp down concerns on Thursday about Libya's weapons.

"On the conventional side, there's been a lot of fear-mongering reporting about missiles and other things," said spokeswoman Victoria Nuland. She said the United States is working with the Libyan opposition as well as neighboring countries to control the movement of any shoulder-fired weapons out of Libya.

Questions also have been raised about 10 tons of mustard gas stored at the Waddan Ammunition Reservation in Libya. Nuland said the gas is secure.

"It is inside massive steel containers within heavy bunkers. These bunkers were sealed by the Organization for the Prohibition of Chemical Weapons ... and we are able to monitor the security with national technical means," she said, referring to the intelligence community's use of satellites, drones and other surveillance measures.

But Nuland also referred to discussions with the National Transitional Council about taking over external security of the facility, raising the question about exactly who is watching over it now.

A U.S. official said the same Libyan government unit that had been guarding the mustard gas stockpile is still doing so, an indication that Gadhafi security forces are still present. But the official said the United States has been closely monitoring the facility and has determined "they have neither abandoned their posts, nor tried to gain access to the materials."

The materials "are secure, guarded and not disturbed," said the official.