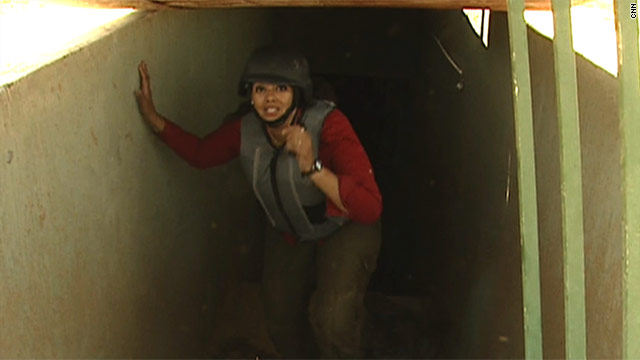 Tripoli, Libya (CNN) -- Rebels in Tripoli furiously hunting for signs of longtime Libyan leader Moammar Gadhafi are exploring a network of tunnels and bunkers built beneath his massive compound.

CNN's Sara Sidner got a peek at the passageways Friday. She dubbed it "Gadhafi's inner sanctum."

The correspondent, who's been covering the battle of Tripoli, walked down steps into a pitch-dark tunnel and used a flashlight to navigate an underworld described as "massive."

So far, she said, rebels have cleared about 700 meters of underground passages. The tunnel network is believed to extend all the way to the city's international airport and the Rixos hotel. That's where 33 journalists and two foreign nationals were held for five days by pro-Gadhafi forces.

It also is thought to extend to a neighborhood where Gadhafi forces were lobbing shells recently toward the compound after it was taken over by the rebels.

The tunnels Sidner saw are wide enough for adults to walk side by side. She spotted a golf cart that can easily fit in the corridors.

Sidner also saw a range of other sights as she strolled through the labyrinth: A thick wall, a massive door and a sturdy lock. A charred ceiling, couches and beds where a fire apparently occurred. Pieces of metal and shrapnel. A section where NATO bombs fell and the roof caved in.

Another room contained videotapes lined up on a shelf, part of a TV studio where Gadhafi may have recorded messages.

"It's set up like a survival bunker," Sidner said in an on-air report. "There is literally a city under here."