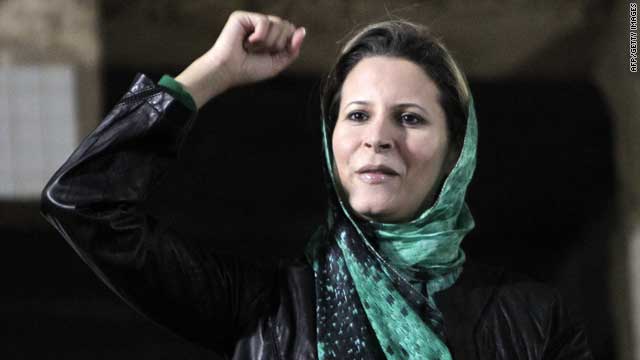 Aisha, daughter of Moammar Gadhafi, salutes the crowds gathered in her father's residence in Tripoli on April 15, 2011.
STORY HIGHLIGHTS

(CNN) -- Moammar Gadhafi's daughter, a former U.N. goodwill ambassador who has kept a low profile during Libya's violent uprising, has given birth in Algeria, sources close to her family told CNN.

The baby, whose gender has not been disclosed, was born shortly after Aisha entered Algeria. Gadhafi's only daughter is doing all right, the sources told CNN.

Aisha had been expected to give birth in September, sources close to the family told CNN.

Known in the Arab media as the "Claudia Schiffer" of the region, the striking blonde beauty was once considered her embattled father's best asset. But, unlike her brothers, Aisha Gadhafi has largely kept out of the public eye as rebels continue to quash the last pockets of resistance from her father's 42-year-old regime.

Many observers expected Aisha to show more support for her father's increasingly beleaguered regime, especially when a NATO airstrike in April killed her brother, Saif al-Arab Gadhafi, and her own daughter -- one of several Gadhafi grandchildren who died in the attack.

One source told CNN that, at the time, she was struggling through a "difficult pregnancy."

It was on "humanitarian grounds" that the Algerian government allowed family members of Gadhafi into the country, Algeria's representative to the United Nations in New York said Monday.

The members of the Gadhafi family in Algeria do not hold political office and are therefore not subject to the same scrutiny by the international community, reasoned Mourad Benmehidi, Algeria's Ambassador to the U.N.

"The wife of someone who has grievances with the international community is not necessarily subject to the same grievances," Benmehidi told CNN.

The government in Algiers feels it important to balance Algeria's obligation of hospitality to the family members seeking refuge with its obligations to the international community, Benmehidi said.

Benmehidi said U.N. Secretary General Ban Ki-moon had been informed. The United Nations on Monday officially confirmed receipt of a letter from Algeria regarding the admission of members of the Gadhafi family.

In February, as Moammar Gadhafi called on the military to crack down on anti-government protesters early in the Libyan conflict, the United Nations terminated his daughter's stint as a goodwill ambassador in Libya for the U.N. Development Program.

In an interview on Libyan state-run television at the time, Aisha Gadhafi said she had heard the news. "I can't verify if it's true or not, but all the Libyans who know me ... know that I am the goodwill ambassador with or without the United Nations," she said.

She had been named to the position in 2009 to address HIV/AIDS and violence against women in Libya.

A lawyer by profession, she is also known to toe a very tough political line. She has been a longtime, loud supporter of anti-government groups -- except at home -- including the IRA and the insurgents in Iraq.

She was famously part of Saddam Hussein's defense team when he was tried. He ultimately was convicted and hanged. When The London Telegraph asked her how she felt about Iraqis who say Hussein slaughtered thousands of their countrymen, she replied, "You are bound to meet people who may be against your policies."

CNN's Richard Roth and Anne Roche contributed to this report.