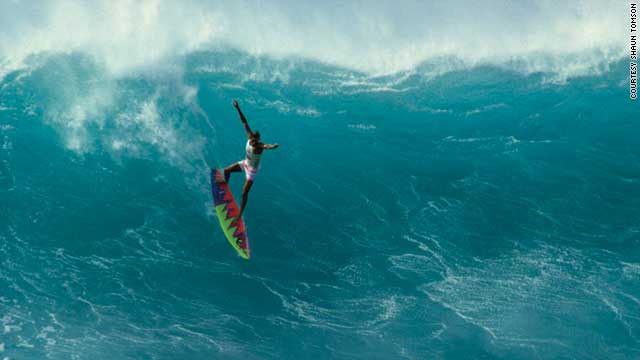 The spiritually of the surf
STORY HIGHLIGHTS

For this legendary athlete, little can rival the sense of exhilaration and peace brought by the jump from land to water.

"There's a moment there when you cross from one universe to another and it always happens the same way," says Tomson.

"All the troubles and worries of the world are behind you: they're left on land and it's just you, the ocean and your board and it's very peaceful and no matter what has happened to you in your life, no matter what struggles you're going through, it's that moment of peace and that moment of cleansing that keeps drawing surfers back."

Lessons from the sea

Having won the biggest competitions in the sport and helped create the world professional surfing tour, Tomson is regarded as one of the greatest surfers of all time.

With his unmatched style and model good looks, he is considered one of the sport's most influential figures, who helped to change the image of surfing for good.

Born in South Africa in 1955, Tomson first took to the surf board as a young boy under the guidance of his father. He soon went on to perfect a pioneering style that saw him carving maneuvers into the face of the waves, attacking them with aggression, rhythm and speed.

In the 1960s he took his unique style to Hawaii's notorious "Pipeline" surf break, known as the "Mount Everest of surfing," and rode some of the world's most dangerous waves, winning fans across the globe.

But Tomson's life came crashing down five years ago with the tragic death of his 15-year-old son, Matthew, who accidentally hanged himself playing "the choking game" -- self-strangulating to achieve a brief high.

The loss of his teenage son irrevocably changed Tomson's life and prompted him to travel the world and share his story.

By talking about the pain of losing a child, Tomson has fashioned another career for himself as a motivational speaker who helps others to deal with life's wipeouts.

"I just told my story," he says. "I told what had helped me, I told how I came through it, I told how you can come out the other side.

"You're going to be scarred, you're going to have a big piece of you missing, but one day you can find happiness again, it is out there."

Just before Matthew's death, Tomson wrote "The Surfer's Code," a self-help guide on the lessons he's learnt from riding the waves.

In the best-selling book, Tomson shares the 12 most important lessons that surfing has taught him about life, offering advice accumulated throughout his illustrious career.

Since its first release "The Surfer's Code" has been re-published and updated, an intensely personal homage to his dead son.

Two years ago, Tomson and his wife Carla adopted a baby, Luke, at birth. Tomson says the child has brought light back into his life.