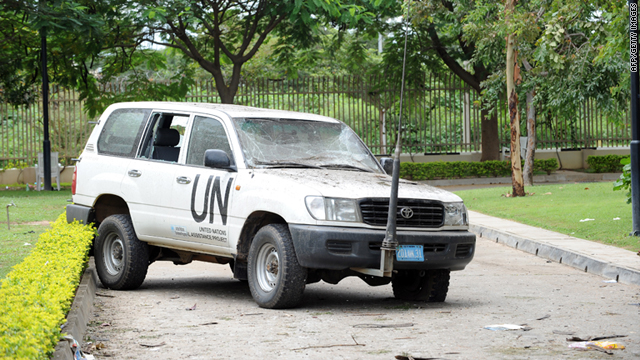 A U.N. vehicle damaged from a blast that rocked the Nigerian U.N. headquaters is seen in Abuja on August 28.
STORY HIGHLIGHTS
RELATED TOPICS

(CNN) -- The Nigerian Islamic militant group Boko Haram says it bombed U.N. offices in Abuja last week because the world body is a partner "in the oppression of believers," a spokesman for the group said Wednesday.

Friday's car bombing killed 23 people and wounded more than 80. Boko Haram, which aims to impose a strict version of Islamic law in Nigeria, claimed responsibility for the attack.

"All over the world, the U.N. is a global partner in the oppression of believers," Qaqa said. "We are at war against infidels. In Nigeria, the federal government tries to perpetuate the agenda of the United Nations."

U.N. agencies operating in Nigeria include the World Health Organization, the U.N. Development Program, the children's organization UNICEF, the Office on Drugs and Crime, the Joint Program on HIV and AIDS and the U.N. Development Fund for Women. The building hit by the attack housed 26 U.N. humanitarian and development agencies, Secretary-General Ban Ki-moon said last week.

Nigerian authorities said Wednesday that the bombing was plotted by a man with ties to the al Qaeda terrorist network. The Nigerian State Security Service said Mamman Nur was a "notorious Boko Haram element" who recently returned from Somalia, where the Somali militant Al-Shabaab has been linked to al Qaeda.

Though a Nigerian engineer was among the dead, Qaqa said the group did not intend to kill the man. He added, however, "We have told everyone that the U.N. is the bastion of the global oppression of Muslims all over the world."

Africa's most populous nation is divided between a largely Christian south and a Muslim north. "Boko Haram" -- which translates loosely as "Western education is forbidden/sinful" -- holds all government authority in contempt and wants to establish a state in northern Nigeria under Islamic law.