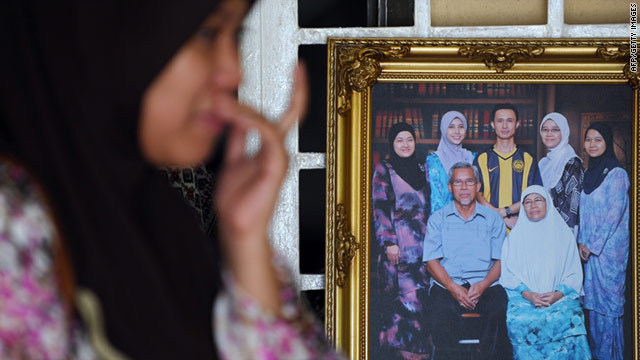 A relative of Bernama TV journalist Noramfaizul Mohd Nor mourns next to a group family photo showing the cameraman.
STORY HIGHLIGHTS
RELATED TOPICS

(CNN) -- Somalia's government said Saturday they are investigating the death of a Malaysian cameraman who was shot dead when African Union peacekeepers allegedly fired on his convoy.

Noramfaizul Mohd Nor was travelling with a convoy of humanitarian workers when a contingent of Ugandan-nationals with AMISOM opened fire, killing Nor and wounding another journalist, TV-3 reporter Aji Saregar Mazlan, Somalia's transitional government said in a Saturday statement.

"The police and the security forces immediately reached the location of the incident and started a full investigation for the shocking action," the government said.

Attempts to reach AU representative were not immediately successful Saturday.

On Friday, Nor was heading to the outskirts of Mogadishu to cover a Malay-sponsored project to help drought victims on behalf of Malaysia's national news agency Bernama.

In an interview with Bernama, Malaysia's Prime Minister Datuk Seri Najib Tun Razak said Nor was a "hero."

"He was willing to take the risk to provide extensive coverage of our missions to help others in many parts of the world," he said.

Reporters without Borders, an activist organization on behalf of journalist, said Friday that Somalia continued to be one of the most dangerous countries in the world for journalists, often caught in the cross-fir between Islamic Al-Shabaab militia and pro-government forces.

"Nor joins the long list of journalists killed in the course of their work in Somalia, Africa's deadliest country for media personnel with 23 killed since 2007," Reporters Without Borders said Friday.

"Despite the recent retreat by the Islamist insurgent group Al-Shabaab, the violence and fighting in Mogadishu have not stopped and covering Somalia continues to be extremely dangerous," the organization stated.